At the prestigious awards held in Somerset, of the 16 classes, cows and bulls from the Briddlesford Lodge Farm Herd won seven, and took reserve in six classes. 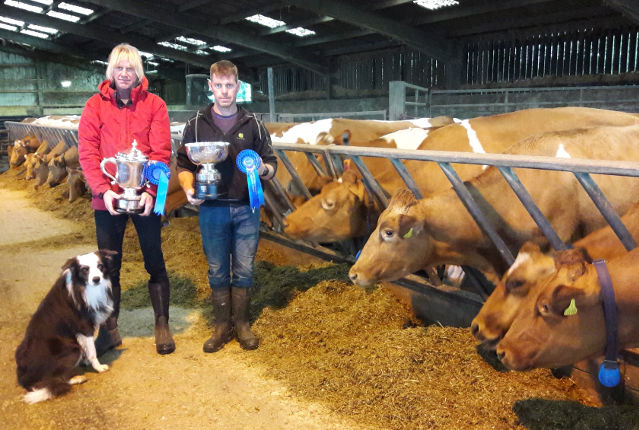 The Briddlesford Herd of Pedigree Guernsey cows again triumphed at the Annual Prize-giving and Annual General Meeting of the English Guernsey Cattle Society.

The event was recently held at Sparkford in Somerset.

Won seven classes
Of the 16 classes, cows and bulls from the Briddlesford Herd won seven, and took reserve in six classes.

Guernsey herds from all over the country were judged on performance.

Best group for the Lily family
The prestigious EGCS Award to the owner of the Family Group of five cows, bred in direct female line, having the highest weight of fat plus protein in the last recording year, was won by Briddlesford’s Lily family.

Leopold best bull
The award for the best performing bull was won by Briddlesford Bluebells Leopold. Leopold’s mother, Briddlesford Laredos Bluebell, was the supreme champion in 2015 at the National Dairy event.

Griffin: A tribute to our herdsmen
Paul Griffin, partner at Briddlesford, said,

“We are so proud of our cows. Doing so well amongst the best Guernsey cow breeders in the country, is a tribute to our herdsmen.  We care for all our cows at the highest standard of welfare management.

“Anyone visiting our farm, shop and Bluebells café can see our cows daily as they walk back from the milking parlour to the pastures.”