The Isle of Wight Green party say the introduction of TTIP could remove protection that Islanders currently take for granted, like a universal public health system, clean drinking water or basic food standards. 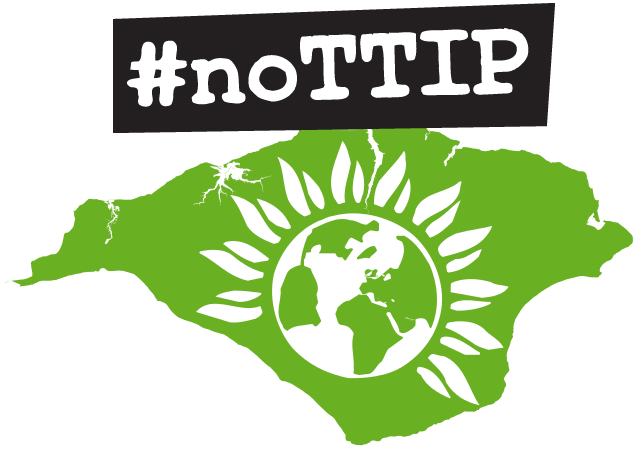 This in from Daniel on behalf of the Isle of Wight Green Party. Ed

The European Commission and the United States Government have been negotiating a deal called the Transatlantic Trade and Investment Partnership, or TTIP. The Isle of Wight Green Party supports the long-standing campaign against TTIP by our Green Party MEP, Keith Taylor. While other political parties are now waking up to the dangers of this free trade agreement, the Green Party has consistently opposed TTIP since the first details of the secretive talks emerged.

“At first glance, TTIP doesn’t look all that relevant to the everyday lives of Islanders, but these trade deals could have a real and lasting impact on us. TTIP aims to put big business interests ahead of the democratic institutions we have built over generations.

“Soon, we might not have the protections that Islanders currently take for granted, like a universal public health system, clean drinking water or basic food standards.

“It’s shocking that we heard nothing about TTIP or globalisation from the other parties in the run up to the General Election.”

If a government is found to be in breach of its treaty obligations, the investor can receive monetary compensation from taxpayers.

Secret tribunals
Our laws are decisions made by democratically-elected governments in order to protect their citizens and the environment.

Private companies should not have the right to overturn these laws, purely to protect their profits. ISDS complaints are made to secret tribunals, by-passing our national courts and leaving our laws one step closer to being written by corporations.

Green Party MEPs have tabled amendments to the TTIP resolution in the European Parliament’s Employment Committee, calling for the explicit exclusion of public services from TTIP.

Oppose TTIP
We urge all Islanders to sign a self-organised European Citizen’s Initiative against TTIP which already has over two million signatures.

The initiative can be signed at the Website which also has more information on the TTIP campaign.

newest oldest most voted
milly
I’m a Green voter but I have to say that it wasn’t them who stood up first on TTIP, who do they mean other Parties? The election is over there is no point in trying to score points. The next big thing at the ballot box is the EU. As far as consistency is concerned, the Green Party done a complete ‘U’ turn on the EU. TTIP… Read more »
Vote Up00Vote Down
derek

Agreed,milly there are other political parties as well against TTIP.

Vote Up00Vote Down
Stewart Blackmore
Another case of the Green Party trying to steal the clothes of those who campaigned against TTIP during the election campaign whilst it remained silent. I attended marches and rallies over the past 12 months on the Island highlighting the dangers of TTIP and I don’t ever recall the Greens being present. Meanwhile many Labour MPs have raised this in Parliament since the election and Jeremy Corbyn… Read more »
Vote Up00Vote Down
ewald
Labour can’t be for PFI deals and at the same time against TTIP because TTIP comes with ISDS which protects the PFI deals in the most sinister way! …. Either the Labour protestor against TTIP does not understand this ore hopes his voters don’t care or don’t understand! And how right the Green Parties warning of Labour sinister voter abuse was shows Labours vote in the Brussels… Read more »
Vote Up00Vote Down
Daniel James
Hi Stewart, Labour did not oppose TTIP before the election, even one of your own MPs said so: http://www.michaelmeacher.info/weblog/2014/03/why-is-labour-not-opposing-ttip-which-gives-multinationals-the-right-to-override-democratic-laws/ I don’t doubt that some Labour activists oppose TTIP, but they are out of step with the party line. Before making allegations about ‘stealing the clothes while remaining silent’ you might reflect on the fact that both Ed Milliband and Nigel Farage had plenty of opportunity to mention… Read more »
Vote Up00Vote Down
ewald
Dear Milly, perhaps you mixing up TPP which is sold by some in the US as ‘taking work away from the USA’and as it came to the Senate last month it got rejected first but not in a famous second vote and the Congress it 10-12 days ago.The Senate and everyone voted for it got 12-14k USD…. However 11 countries in the Pacific Region negotiate with the… Read more »
Vote Up00Vote Down
Geoff Lumley

Well said Milly and Stewart. Sadly the Green Party is all too keen to have a go at some other parties without real justification.

green party today are like the socialist workers party 20 yerars ago. theyd be at every picket and demmonstration handing out banners to evryone to make it look lkike the whole protest was their idea in first place

Yet more pointless party political point scoring. It’s like the bl**dy election all over again. What matters is this horrendous trade agreement and its implications for all of us. We need to stand firmly against it regardless of political affiliation.

Vote Up00Vote Down
Tanja Rebel
Well said, Jon Thorne! ALL parties should stand against this very dangerous Trade Deal (but very few as yet do),as it will have a disastrous effect on our Public Services, Food Sovereignty, Environmental Standards as well as Animal Welfare standards. If you are against putting more anti-biotics in animal fodder, more pesticide use or further privatisation of Public services, then contact your MEP at once to make… Read more »
Vote Up00Vote Down
Tanja Rebel

Last night in Washington TPP in the US Senate!

“Legislation vital to securing the largest U.S. trade deal in decades was passed by the Senate on Wednesday by a comfortable margin, advancing President Barack Obama’s efforts to strengthen U.S. economic ties around the Pacific Rim.”

Vote Up00Vote Down
Rod Manley
This article seems to be saying that it is only down to being in the EU that this TTIP thing is going to be decided.I don’t agree. The European Commission and the United States Government have been negotiating the deal, but Cameron has also been talking to America.If Britain decides to pull out in the referendum they still want TTIP. In fact the US wants us to… Read more »
Vote Up00Vote Down
Cicero

@Rod “You can’t separate TTIP from membership of the club.”

If TTIP is signed, then I do not want to be a member of a club controlled by Wall Street.