Live coverage as it happens

VB are reporting live from the Cabinet meeting at County Hall. 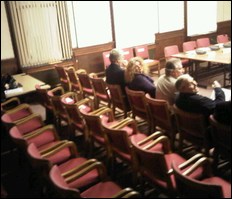 For details of agenda items, check the agenda and associated papers via the Isle of Wight council’s (IWC) website.

Please refresh / reload your browser to see the latest updates.

We will endeavour to report presentations and discussions as accurately as possible. Text surrounded by () signifies VB’s comments.

[17:49] Never seen so many chairs in the room. Strangely for a meeting with so many public wanting to attend it’s been held in a conference room, with the overflow in the main chamber. Everyone in place now.

We’re off. Cllr Pugh in the chair.

[18:04] Update 1
Bob Blezzard Q: Dave Burbage. Company and employee for S.151officer. Why a consultancy? 4 years an excessive amount. What is the total amount? Pension funds + Other people being employed.

Cllr Pugh: We won’t normally talk about employees, but will in this case. Agency costs £30k year. Not paid now. External auditor OK with it.

Other manager – chose not to answer the question about other two staff contracted.

A: New and more flexible ways for employees will be explored.

A: Cllr Cousins. Supporting young people is a key area. Connexion service decision haven’t been made. Seek to support. Will give details when we have them.

A: Cllr Giles – £200k saving will be needed if floating bridge not charged for. Southampton Uni – not professional consultants, but students. We see no value in seeking this consultancy.

A: Cllr Pugh: Turnover sometimes beyond our control. Academic results holds us back – it’s been the key factor. School changes will help. £1.5m saving in top staff cuts.

(It’s all going well is the summary)

Q: Cllr Welsford: Role of Scrutiny Committee. I’d like it to be more active. Bring people in, etc.

A: Cllr Cousins: We need to look at strengthening it in a workshop. Trying to get more young people involved. Possibly have one on Scrutiny Committee.

[18:31] Update 5
Cllr Howe: I’d like Scrutiny Committee to move on. I’d like to comment on items on Forward Plan and be able to pull people in to find out why decisions are being made.

Cllr Mazillius: “This is another good news story”. Pointing out with pride that the council is doing “Well” (C2 item 1.9). One Excellent.

Cllr Cousins: This service has come a long way.

Q: Cllr Welsford: Will our performance be affected by raising of threshold? To critical

A: Cllr Maz: (Didn’t answer first), then pushed again said, it will not affect it, because we will manage it properly

Will continue to pursue £900k for damping. MP, Turner will bring it up in the house tomorrow. Met with him last week. Lots of people questioning in County Hall – rise from 350 to 700 staff.

It’s been part of medium terms strategy for two years. The economic situation has made it essential.

(Sorry folks, I’m really feeling too knackered to stay up with this tonight – Simon)

An amendment has been made to the Budget which will take into consideration outcomes of the consultations on libraries, public toilets, Waterside Pool and charges on the floating bridge.

The Schedule of savings set out in Appendix 5, subject to:

* consideration of the outcomes of the consultations on the future of the library service and public conveniences, and any recommendations, with budget implications, emanating from that;

* consideration of any viable proposal, under active consideration at the time of the budget setting process, for the future management of Waterside Pool;

* further work to be undertaken to find alternative savings that would not require the introduction of passenger charges on the Chain Ferry;

* further work to be undertaken to ensure that budget savings of £17.833m are still agreed, taking into account any revised recommendation and budget implications relating to the above

[19:20] Update 8
Changes to flow of info to parish / town councils. Straighten out confusion with parishes setting precept, without knowing what they’re being asked for.

(hallelujah from the public)

[19:35] Update 9
Recommendation: “Explore transfer of Westminister House either to social enterprise model or to a private or voluntary sector provider.”

The future of The Gouldings + Adelaide will be carefully looked at in the near future.

__Next item
Cllr Brown on Library consultations. “Very gratifying total response”. Responses ranged from (very many) don’t change how it is now, to community.

“Can operate rather more efficiently”

“This isn’t a comprehensive reply” that will come later.

Libraries Local – wasn’t well liked. Community libraries will be used in the future.

It’s very clear that locals feel strongly. “If we can identify other savings, Foot passengers and cyclists would remain free”

Cllr Giles: I’ve made representations on behalf on the people of the town. See it as a floating bridge for a chain ferry. Practicality is also an issue

Saying people have volunteered to run the East Cowes library

Cllr Maz: “I honestly never thought that our suggestions would ever lead to the complete closures of any libraries”.

Cowes, Gurnard (and one other) – setup a cross council discussion about transport.

Cllr Ward: Thanks for finding a way forward. Ask that staff hours be used with some flexibility.

Cllr Humby: Sandown will welcome the news – 3 days a week.

Some costs to fall on Parish councils?

Cllr Brown: Yes to flexibility of hours. We hope there will be an enhancement of the IWC hours, by volunteers – translated volunteers can keep the libraries open longer. People have written in their hundreds.

__Cllrs questions.
Thanks for extension of the time for Waterside pool to get their ideas together.

Cllr Whittaker: On behalf of the clients of Westminster house – thanks

__Next
Cllr Howe: why will our PFI be twice the amount that Portsmouth did?

Cllr Knowles: Derbyshire is employing head of finance on £75k. Is Dave Burbage Ltd too expensive?

Cllr Barry: £21m less than when Pugh came into leadership.

Cllr Pugh: Legislation days – One ‘officer’ has to be used, not one person.

newest oldest most voted
no.5

How can Brown comment on the library consultation when it only finished hours ago? How can he make recommendations without having collated what the public have to say??

Because it was already decided- this council do not understand the meaning of the word “Consultation”.

Vote Up20Vote Down
DP
Well at least we know now why Westminster House isn’t moving to the Gouldings – Its because “The future of The Gouldings + Adelaide will be carefully looked at in the near future.” I.e. they are the next for the chop!! So much for listening to the public Roger – you obviously decided that not only will you close Westminster House (or even better, sell it), you’re… Read more »
Vote Up20Vote Down
Victor Meldrew

I dont think they will close Adelaide/Gouldings. More likely it will be transferred to a housing provider/social enterprise.,

The council is moving away from being a provider and when Ian Anderson was posed the question about Gouldings his reply was much along those lines.

It gets the council out of having to pay redundancy, although what effect it has in the pension fund is anybody;s guess.

All of what they say can be taken with a pinch of salt. They sometimes lie, they often lecture, they pretend only they have the answers, as they confuse those who are easily confused. Don’t fall for it, their agenda is decided, the course is set. Keep fighting the *******.

Vote Up20Vote Down
rosie
what happens now then , do we all just go away and forget everything for a year ,only to be back where we started , keep fighting to save our libraries and our librarians, what happens in 3 months to the others, are we in this all together or not, we cant accept this its not what we have campaigned for. george brown is just playing with… Read more »
Vote Up20Vote Down
Dave Q

Remember the “Dunkirk Spirit”- The fight must go on.

Vote Up20Vote Down
Meursault
‘Cllr Giles â€“ Â£200k saving will be needed if floating bridge not charged for. Southampton Uni â€“ not professional consultants, but students. We see no value in seeking this consultancy.’ Am I right in thinking that this group were looking at doing the analysis for free? If no cost then surely anything they add to the debate would hold some value? And more than likely provide immense… Read more »
Vote Up20Vote Down
Isla White

These are not just students but post-graduates who could well be consultants.

Vote Up20Vote Down
Mr Justice
Yes folks, Giles realised his days in office were numbered if they introduced pedestrian charging on the floating bridge. I suspect the heat he felt at the recent meeting helped to convince him. Well done all who created it :) The Dave Burbage Ltd issue will not go away. Simply saying Burbage ‘does a lot more than someone in a similar position’ getting half as much wonga… Read more »
Vote Up20Vote Down
Dave Q

Remember, Cllr Giles only had a majority of 16 votes at the last election and he actually only recieved the votes of 13% of the electorate. He needs to worry!

Vote Up20Vote Down
Smoke and Mirrors
Quote from above…… “Cllr Pugh: We wonâ€™t normally talk about employees, but will in this case. Agency costs Â£30k year. Not paid now. External auditor OK with it”. So how much exactly did it cost to get the council out of the contract with the agency, there must have been a final payment or penalty clause and some cost to the taxpayer in this, we as taxpayers… Read more »
Vote Up20Vote Down
allan marsh
Cllr Giles: Iâ€™ve made representations on behalf on the people of the town. See it as a floating bridge for a chain ferry. Practicality is also an issue East Cowes meeting referenced again â€“ this time on libraries Saying people have volunteered to run the East Cowes library at what point in the meeting did anyone say they would volunteer to man the library,if my memory is… Read more »
Vote Up20Vote Down
Dave Q
I can confirm that at the meeting in East Cowes Town Hall Clly Giles was specifically asked what had happened to the Â£25 million reserve that the council had when the Tories came to power- his reply was categorical- we still have the Â£25 Million- now either he was lying or Cllr Pugh wasx lying when he said Â£5 Million. Is it not a criminal offence for… Read more »
Vote Up20Vote Down
ron nasty

Maybe not lying but he certainly gave a false impression. As was made clear last night most of the money is set aside (and has to be) for particular purposes. The spendable reserve is just over Â£2m. If we had Â£25m we would have something that could be used to save some of these cuts from being made.

Vote Up20Vote Down
Z. Morgan
Collins English Dictionary:- CONSULT v. go to for information or advice… I understand the people of the Isle of Wight have INFORMED and ADVISED the Council of their strong views on the the consultation document A New Chapter-a fresh direction for the Islands Libraries. The few at the top of the IOW Council have utterly disregarded this response. They are not answerable to anyone it seems. If… Read more »
Vote Up20Vote Down