Fantastic news for this Isle of Wight choir, our best wishes for Sunday to all involved. Ed 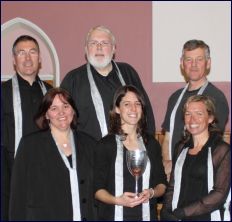 The Isle of Wight’s Camerata Chamber Choir is performing at the Royal Albert Hall on Sunday 8 July with a selection of other invited choirs in a performance including the work of Karl Jenkins.

The concert will be conducted by renowned choral conductor and former Kings’ Singer Brian Kay.

Camerata’s next Isle of Wight performance will be as part of the Ventnor Fringe Festival at 7:30 PM on 16 August at St Catherine’s Church.

The choir, winners of the 2012 Musical Composition Festival, have big plans for their 2013 spring concert and will keep you informed.

The choir still has room for singers, particularly male. Surprisingly relaxing auditions are held for potential members to assess the all-important tonal quality.