Carl Feeney: If I become MP ‘probable’ hung parliament ‘will want my vote’ 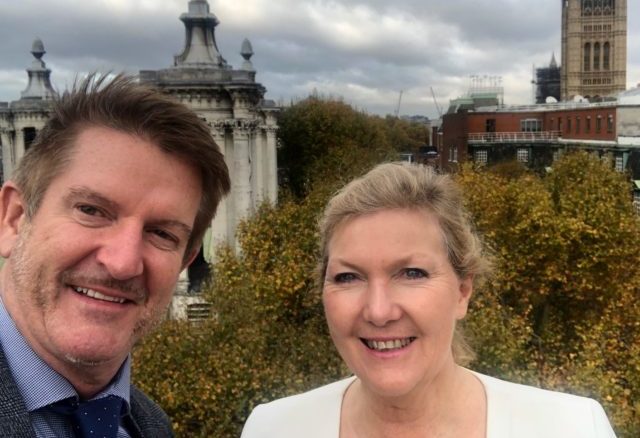 Another hat has been thrown into the General Election ring on the Isle of Wight as fixed link campaigner, Carl Feeney, has announced he’ll be standing within the national Independent Network (IN).

Having spent two days last week at the offices of the Independent Network, Carl explained,

“Leader Marianne Overton MBE and I, had successful discussions in which we both confirmed our intentions to work together during the campaign and after.”

Will fight for a fixed link
Carl says he has four main policies that set him apart from the others candidates, the first being the issue he is known for on the Island, the implementation of a fixed link. He says,

“Many on the Island may recognise my name because of the Fixed Link campaign I’ve spearheaded for the last five years.

Favouring a no-deal Brexit
His views on a non-deal Brexit are clear, as he explains,

“My Brexit stance is out. I love Europe, it’s a fantastically interesting and beautiful continent with incredible people. However, the damage the Conservatives have inflicted on our relationship with the EU is irretrievable.

“The Brexit chaos has discredited and embarrassed us worldwide. To now stay would be folly, we’d never be taken seriously, anywhere. Sadly, a no-deal Brexit is the only option, but the quickest and eventually most productive.”

Feeney: “They will want my vote”
Carl believes that should he become MP, he would, “be in an advantageous position to negotiate deals for the Island with any political party”.

“The result of this election will most probably be a ‘hung’ parliament. Whichever coalition has taken control, they will want my vote. I will at each stage ask what can be done for the Island in return?”

16 Comments on "Carl Feeney: If I become MP ‘probable’ hung parliament ‘will want my vote’"

Another vanity project. Another lost deposit.

Vote Up79-15Vote Down
iain mckie
I would say that the cost is significantly higher than merely the deposit. Leaflets, advertising hoarding, posters, websites etc. To even think of competing the independents need to lay their hands on a minimum of £20,000 each. With less than 6 weeks to go they need to persuade 30,000 odd people (most of whom have not heard of either) that they (and they may well do) offer… Read more »
Vote Up28-9Vote Down
dujardin

The only good things that will come out of his candidature will be a chip off his overinflated ego and a little bite into the Tory/BP leave vote.

This really is scraping the bottom of the barrel. I’d rather have Andrew Turner back than tunnel obsessed Feeney. Heaven help us all.

Another candidate for the ‘lost deposit’ party. A waste of oxygen and time.

Voting for our future is far too important to waste a precious vote on a none starter.

Lets split the vote even further to ensure that Seely gets back in. These Independents need to grow brains

Vote Up23-5Vote Down
nickrowe
He probably will lose his deposit. And the Island will return a politician only interested in climbing the career ladder. Using the IOW as his stepping stone to the Foreign Office presumably. One of the biggest issues facing the Island and especially for our children and grand children is the ability to reliably and cheaply move on and off the Island. I’m not saying a tunnel is… Read more »
Vote Up13-10Vote Down
blazkshadow

Vote Up1-4Vote Down
smiffy
Let’s hope the 3 previous comments are proved incorrect. Councillor Brodie has my respect for using his real name, as I do . The other 2 have not. We need an Island based M.P. who is of here and lives here. No one since Steve Ross has really had our interests at heart or asked us what we wanted. The present incumbent is a prime example of… Read more »
Vote Up15-38Vote Down
Dalek

That’s just it, he hasn’t asked us what we want, he’s told us what he wants for us. The interests at his heart are based on his wallet. He has a large property portfolio that will increase in value rapidly if there is the merest hint of a fixed link. It’s about him, not the island.

Check out Labour’s new candidate, Richard Quigley. He seems to fit your bill and would make a superb MP for our sland

Vote Up18-18Vote Down
Paul Cheverton
Guess they are taking a leaf out of Mr Feeneys book with fake accounts and rigged tunnel surveys on the CP. He blocks anyone with a view other than his own on his online debates and also stated on the CP that he was thinking of pulling out of the tunnel campaign due to the personal cost to himself and his family. This was about two months… Read more »
Vote Up32-2Vote Down
Jenny Smart

I really don’t know what all the fuss is about.

Mr Feeney has strong views which he feels very passionate about, he doesn’t flip flop like our previous MP, now just aBother candidate, Bob Seely. Mr Feeey is an islander unlike other part time residents.

Voters can choose to vote for Mr Feeney, or not. It’s surely A good thing to have a choice.