Wightlink helps couple towards finishing post of charity challenge in aid of the RNLI. 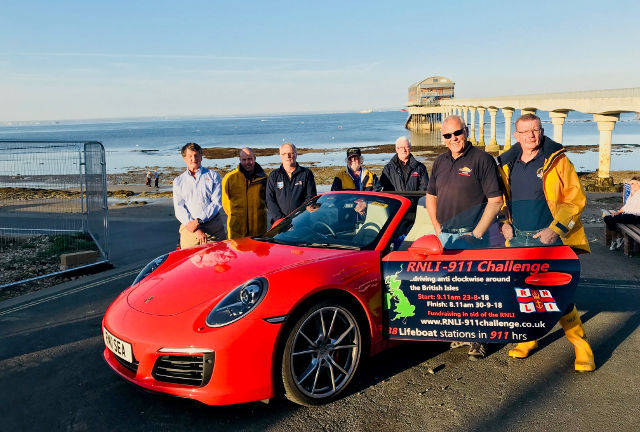 The final leg of an intrepid charity drive around the British Isles and Ireland by a motoring-mad couple was given a boost by ferry operator Wightlink.

London-based couple James and Belinda Richardson have, since the end of August, been undertaking a unique fundraising challenge – to drive anti-clockwise around the British Isles and the whole of Ireland visiting all 238 Royal National Lifeboat Institution lifeboat stations in a Porsche 911 within 911 hours! The trip – the first ever national car challenge in aid of the RNLI – was inspired both by the couple’s ardent support of the maritime charity, which started when they owned their own inflatable on the Thames over 20 years ago, combined with their enduring passion for the Porsche 911.

Three venues on the Island
Their journey has included the Isle of Wight’s three RNLI lifeboat stations at Bembridge, Yarmouth and Cowes as well as the Inshore Lifeboat Centre in East Cowes and Wightlink was delighted to send them on their last lap – the trip to the capital – with a free crossing.

“We wanted to set ourselves a unique challenge in a unique car supporting a unique charity that would benefit many others. Since retiring and at long last being able to finally own a Porsche 911 of our own, we felt the timing was right for us to be able to do this.

“We are very grateful to Wightlink for helping fund the final leg of our journey back to the mainland to help us reach our finishing post in London.”

Belinda: “Our way of giving something back”
Belinda adds:

“We are always at our happiest when visiting the British Isles coastline – come sun, wind or storm and we know how lucky we are to have organisations like the RNLI who rescue 1,000s and save 100s of lives at sea each year.

“This has been our way of giving something back and helping to raise awareness of the amazing work that they and their volunteers do.”

“As a maritime company we are a keen sponsor of the RNLI and the incredible work they do.

“We were only too pleased to support James and Belinda as they set off on the final leg of their journey and are delighted that they were able to successfully complete their challenge.”

It is hoped that the RNLI-911 Challenge will raise in excess of £56,644 (£238 per lifeboat station) and increase public awareness, support and donations for the RNLI.

Show your support
Donations can still be made via the special fundraising Website.