Watch out for changes to the Red Funnel timetables in July

If you’re planning to travel with Red Funnel next month, look out for changes to the timetable. This in from Red Funnel in their own words. Ed 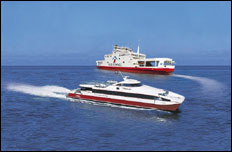 Red Funnel has announced the following timetable amendments to accommodate events taking place in July. The Company would like to apologise to any guests who are inconvenienced by these changes.

Tue 3 July 2012
Due to P&O’s Grand Event (7 ship’s) taking place in the Port of Southampton on Tue 3 July, travellers are reminded that there will be no 1700 hrs vehicle ferry sailing from Southampton or 1830 hrs sailing from East Cowes.

Foot passengers who intended travelling on these sailings will be permitted to use their tickets on the Red Jet service which is unaffected.

Sat 14 July 2012
To coincide with the Olympic Torch Relay which is travelling on Red Funnel’s 1630 hrs sailing from East Cowes to Southampton on Sat 14 July, the 1645 hrs Red Jet departure from West Cowes will not arrive in Southampton until 1730 hrs (45 minute crossing).

In addition, the 1715 hrs Red Jet sailing from Southampton and 1745 hrs sailing from West Cowes will not operate. The late afternoon timetable on that day for the Red Jet’s will be as follows: –