The Isle of Wight Economic Partnership have publicly announced today their support for the Cheverton Down Wind Turbine planning application.
The application attracted over 1800 comments from the public whilst it application was open to comments.
The IWEP believe that the investment in turbines on the … 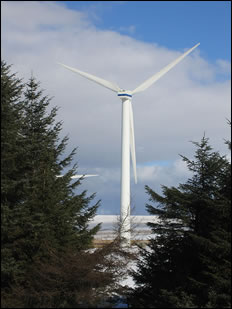 The Isle of Wight Economic Partnership have publicly announced today their support for the Cheverton Down Wind Turbine planning application.

The application attracted over 1800 comments from the public whilst it application was open to comments.

The IWEP believe that the investment in turbines on the Wight will deliver strong economic benefits to the Island, as well as bringing us closer to one of the ‘Eco Island’ goals of having the lowest carbon footprint in England by 2020.

In their statement, the IWEP showed strong support for Vestas, who employ over 600 Island people across their East Cowes and Newport sites, specialising in the construction of wind turbine blades.

It’s claimed that in the year ended 2007, Vestas injected an estimated £30 million into the Island’s economy in terms of money spent in staff wages and on local suppliers.

They go onto to say that this Wind Turbine development could see the Island benefit to the tune of £2.5 million from the total expected spend of between £9 and £10 million. The opportunity for Island businesses to obtain direct contracts could see this figure increase further.

“For Vestas to use the latest wind technology on the Island creates a unique opportunity to combine research, manufacturing and deployment of wind turbines in a single location.

This will firmly establish the Island’s position at the centre of the wind energy sector in the UK. At a time when everyone is looking to support employment and investment, we should not under estimate the importance of this opportunity to sustain a long-term source of skilled Island jobs in a rapidly expanding sector.

We are concerned that if the proposals were to be refused, Vestas may at some point reconsider their future plans concerning remaining on the island given the negative message a refusal would relay. It would seem incomprehensible to not be able to house the very products made by the company”.

7 Comments on "Cheverton Down Wind Turbines: IWEP Show Their Support"

Hang on a minute!
What happened to so called journalistic impartiality, or has Ventnor Blog now nailed its colours firmly to the CLAP bandwagon?
For every IWEP, Footprint Trust etc, there are as many, if not a lot more, amenity groups etc., against the proposal, including a regular contributor to the Blog, CPRE.
What happened to balance VB?

Vote Up00Vote Down
Sally Perry
Before you get all worked up Tommy, this is a news item. The IWEP press release was sent to all media, who no doubt will all cover it. That’s how news works. We haven’t said we agree with their support of the turbines or said that we’re against it. We remain impartial. As I am sure you will remember, we couldn’t have tried harder to get ThWART… Read more »
Vote Up00Vote Down
INSIDER

“….as well as bringing us closer to one of the â€˜Eco Islandâ€™ goals…”

Eco Island? is that still on the table?
I thought it was just Duckworth spin that went off to greener pastures with him.

and Tommy don’t you think that’s just a tad paranoid?

Vote Up00Vote Down
Tommy
“Tommy donâ€™t you think thatâ€™s just a tad paranoid?” Touche, mon vieux! No, not really. Its a non-news story for two reasons. Firstly, IWEP exist, according to their blurb, to “co-ordinate economic development, regeneration, skills development and enterprise hub creation”, yet they don’t seem to have the nous to comment on a planning application WITHIN the consultation period, which ended on 27 February. Secondly, their comment on… Read more »
Vote Up00Vote Down
Simon Perry
@Tommy “Secondly, their comment on the application was put on the planning website on Monday 2nd of March. Today being the 4th, it is hardly â€œnewsâ€.” This comment is far beyond reasonable. It may be of little surprise to everyone apart from you that we didn’t scour the list of who has and hasn’t put in comments. The IWEP got in touch with us to let us… Read more »
Vote Up00Vote Down
Rowan
I’ll declare my view openly – I’m in favour of wind turbines on the Island. But even if I weren’t, I’d still agree with Ventnor Blog publishing the IWEP’s view. Democracy – and that’s what VB are trying to help – is supposed to be about people of all opinions having a chance to say what they think, unless what they say undermines somebody else’s rights (possibly… Read more »
Vote Up00Vote Down
windturbine

Vestas is very good at the large wind turbines but there were still many other good manufacturers like GE, Simese,Nordex and Aeolos.