Amazing what you can do in an hour, if you know your subject inside out.

We’ve really enjoyed the Ventnor Fringe events that we’ve gone to so far. They’ve been stimulating and impressive – even more so given that they’ve all been organised by the team, who are under 20 years old. 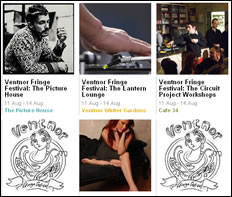 If you haven’t been able to make it along yet, have no fear, there are still more events to see and take part in today and Saturday.

All of the events have been listed and displayed on the
Events OnTheWight Web site.

One of the great things about the event is that there’s just so much going on. With that comes a difficulty of knowing what’s actually happening.

Chris grew up in Ventnor, and has since become really rather good at computers, settling at the University of Southampton’s School of Electronics and Computer Science. He’s part of the world-leading team there that includes the inventor of the World Wide Web, Sir Tim Berners-Lee.

One of Chris’ current projects is representing events, or as it’s otherwise known, Event Programme Ontology.

Re-visioning the timetable
Knowing this inside-out as he does (he developed after all), allowed him to take the basic information about the many various Ventnor Fringe events and structuring them into a timetable for each of the venue around Ventnor.

Not only can you see the running order, but a link under each of the events takes you to a spot on a Google map, so you can find each venue easily.

Amazingly, what he produced took him a mere hour – and this was while he was eating his evening meal!

Look for yourself – Lots still going on
Take a look at Christopher Gutteridge’s Ventnor Fringe Timetable.

We are, to say the very least, impressed.

newest oldest most voted
Christopher Gutteridge
This is something I think should become normal for all festival webstites, providing a programme in a really simple computer format so people can build new viewers for web or phones and all the event has to do is keep the file up-to-date. Anyone with any ideas, or who would like to use this for their event (for free!) should drop me a line [email protected] On another… Read more »
Vote Up00Vote Down
Rachael Berry

Christopher Gutteridge (aka “Chris the Genius”): another dazzling jewel of ingenuity amidst the trove of talent pouring steadily from Ventnor’s steep shores