Southampton councillors say they want to properly analyse the exceptional response to its 12-week consultation before a plan is sent to Westminster. 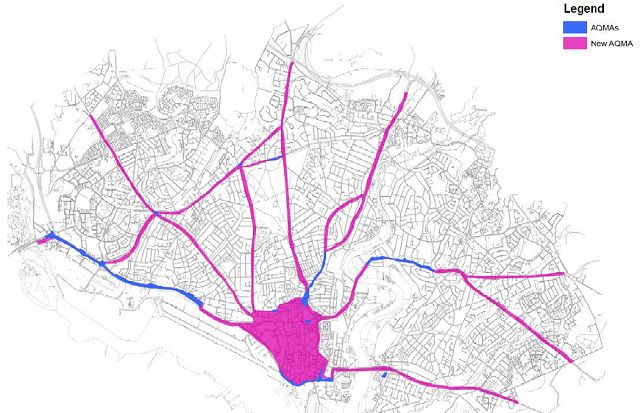 Southampton civic chiefs have pushed back plans for a Clean Air Zone in the city, and will now submit proposals at the end of January – two months after originally billed.

Councillors say they want to properly analyse all of the 9,299 responses to its 12-week consultation before a plan is sent to Westminster.

Plans were originally earmarked to be submitted this month.

Schedule for proposals
New Forest District Council, however, will hand its proposals in on 31 December, with Southampton following suit on 31 January.

Before this, the plans will be discussed by city councillors at its Overview and Scrutiny Panel on 16 January, and then a decision will be taken at a special Cabinet meeting on 22 January – held in the Guildhall.

The district council will follow a similar course, with discussions being made at its Environment Overview and Scrutiny Panel on 13 December, with a decision being made at Cabinet on 18 December.

“Clean air is vital to the health and wellbeing of people in the Southampton and the New Forest, and the huge response to the consultation shows the strength of feeling.

“Our shared priority is to reduce dangerous levels of nitrogen dioxide to within legal limits in the shortest time possible. I’d like to thank local residents and organisations for taking the time to share their thoughts and ideas.

“The consultation feedback, in conjunction with the technical assessment results, will jointly inform the business case we submit.”

Consultants commissioned
As well as the consultation, both authorities say they have commissioned “extensive transport and air quality modelling work from independent consultants” to add to their due-to-be-submitted business plans.

The results of both consultations will be released on 3 December.

SCC: Exceptional volume of feedback
A spokesperson for the council added:

“The delay to Southampton City Council’s business case submission has been caused due to the amount of analysis required following the exceptional volume of consultation feedback, changes to baseline data provided through the consultation that has impacted on the air quality modelling, and feedback that has promoted further exploration into social and economic impacts.

“It is important that all these elements are given the attention they deserve, and this takes time.”

Tasked by the Government
As reported, Southampton is one of five cities across the country that has been tasked by government to lower its nitrogen dioxide amount to the EU-imposed level of below 40 micrograms per cubic air metre. It currently sits at around 42.

The city council says it has been lobbied to achieve this level “in the shortest possible time”.

Thus, it has suggested that a commercially charging clean air zone could be the answer, although civic chiefs add that they have not yet made a decision, and other option – without charging – may be preferred.

If the chargeable zone is implemented, lorries, buses and coaches could all be billed up to £100 a day to enter the city.

newest oldest most voted
johnr
Councillors say they want to properly analyse all the 9,299 responses to the consultation. If it had only been a few replies would this proposal have been simply pushed through with little or no regard to consultation? The main bug bear with this is the time scale with which it is proposed to implement this legislation not giving businesses the chance to renew / update vehicles etc… Read more »
Vote Up7-6Vote Down
hialtitude

Motorists are killing the planet with the use of cars, relax park walk catch a bus and please don’t kill children with fumes, have a good day.

Vote Up6-4Vote Down
redstream
Johnr is correct. It’s the proposed timescale for implementation that is the problem. The island’s economy could be badly hit if those smaller businesses particularly in the logistics sector and the long distance coach market don’t have time or the finance to replace their vehicles with low emission models. I hope that Southampton and Portsmouth find ways to derogate IOW freight and tourist vehicles for a period… Read more »
Vote Up2-2Vote Down
iowdave

It’s not just motor vehicles. Add in combustion of smoky fuels, bonfires etc and you have a big problem.