Community donate over £1,000 to Freshwater Independent Lifeboat at weekend event

Pitched against bad weather and Rugby World Cup, volunteers from Freshwater Independent Lifeboat were astounded by generosity of local community 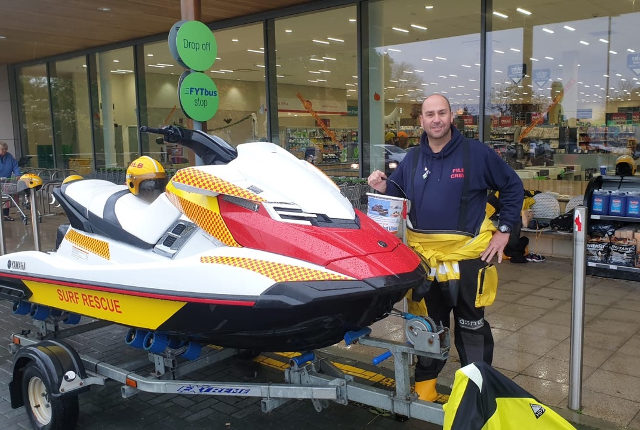 Freshwater Independent Lifeboat arrived at the Co-op in Afton Road, Freshwater with a little apprehension at the weekend.

The weather wasn’t very inviting, and England were playing in the semi-finals. However, we needn’t have worried.

“It was great to talk to the locals, and we’ve also had a few people interested in joining the lifeboat crew!”

“The fantastic response we get from the local community at these fundraising events never ceases to amaze me, especially when the weather and live World Cup rugby were against us!

“We made a lot of new friends and hopefully some new prospective crew and volunteers.

“When we emptied the collection we where overwhelmed to discover the locals had donated an amazing £1,065 — breathtaking!”

Trainee Ian Plested (pictured at top of article), was overwhelmed,

“People are so friendly, they’re great! We had some great chats about the lifeboat and what it’s like to be on the crew.”

News shared by Martin on behalf of Freshwater Lifeboat. Ed