Joe sailed his sea going ‘house boat’ 450 miles in order to raise money for Cowes RNLI and Isle of Wight Society for the Blind. 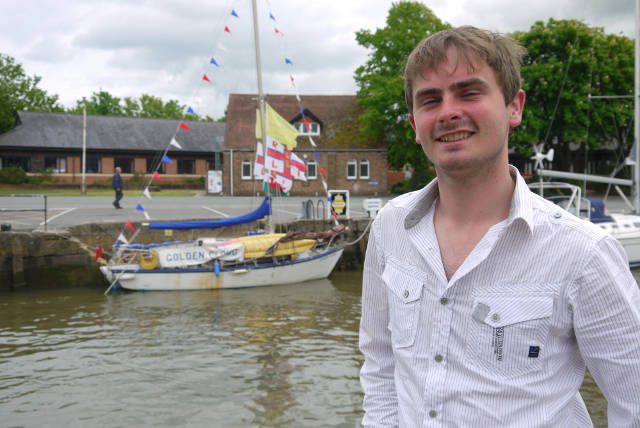 Thanks to George from Cowes RNLI for this latest news. Ed

Joe Pearce’s family turned out in force at the quayside of Newport Harbour today to welcome him back to the Isle of Wight after a challenging sail from North Wales in his 42 year old yacht, in which he sought to raise funds for the RNLI.

“He had the idea that living on a boat had more attraction than the usual student accommodation, so purchased the yacht on line for £800, the equivalent to two months rent,”

Sailing the seas
Then Joe, now 23, decided after getting his degree he would sail his sea going ‘house boat’ the 450 miles to the Isle of Wight, calling at eight ports on the way. At each port he would display boards and relevant flags, seeking donations for the RNLI and the Isle of Wight Society for the Blind. This second charity was because his carpenter father, Nigel Pearce, was now registered blind.

He admitted that the yacht, although sea-worthy, had seen better days; even his tender was a kayak, secured to the deck. The boat’s age became especially apparent when his engine broke down.

“I was ready to make for the nearest port under sail, but Milford Haven Coastguard persuaded me that, because of the sea conditions, to take a tow from the RNLI inshore lifeboat at Newquay. It just happened to be out on exercise and apparently would welcome the practice. So I then had personal reason to be grateful to the RNLI!”

Although he had an advanced level powerboat qualification his previous experience of sailing boats was confined to Optimist dinghies.

“That’s why I was initially accompanied on my voyage with someone who had experience with a jib. But for most of the 120 hours of sailing I was on my own. And because I was single-handed I kept in contact each day with the nearest coastguard station.”

He has now secured a mooring in the River Medina for the Golden Cloud, and is interested in adding to his growing knowledge of RIBs by touring the RNLI’s nearby Inshore Lifeboat Centre at East Cowes. Before that he wants to see Cowes’ new RNLI lifeboat station and its Atlantic 85 RIB ‘Sheena Louise’.

With his Totland home not far from the RNLI lifeboat at Yarmouth he fully appreciates the work of the charity.

“That’s why I thought it only right I should become an offshore member before I embarked on the trip.”

Thankyou to the RNLI and IW Soc. for Blind for all your help and advertising. The Blog related to this journey is on http://www.24ftescape.blogspot.com and a just giving site for anyone who’s interested will soon follow! (IWSB had issues becoming members of virgin money giving due to their small size)