This award-winning Crochet Cafe was set up by a Local Area Coordinator, and despite the blow of IW Council scrapping LACs, the Cafe has gone from strength to strength, with community members stepping forward to help run the initiative. 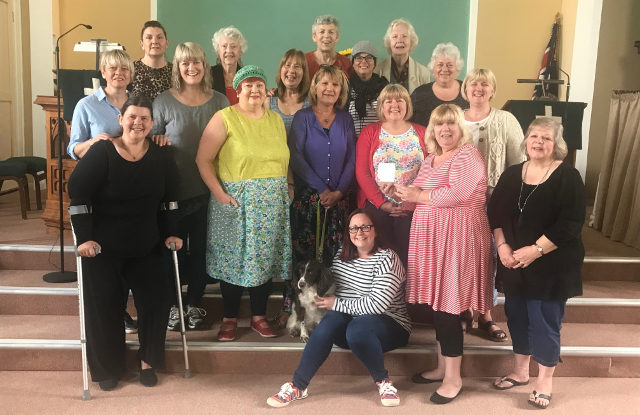 Fantastic news for The Crochet Cafe, which has been recognised for the impact it’s having on women across the Isle of Wight, picking up an NHS England Alliance Excellence in Health Creation award of Community Assemblers.

It began with a gathering in Sandown of women of all ages, brought together with a common interest in crochet.

Sally’s aim with The Cafe was work towards reducing isolation, boost mental health and wellbeing, reduce unnecessary intervention from services, and allow people to use new found skills to benefit others.

“We teach for free, making the cafe accessible to everybody, and use community venues such as churches and local shops to host the weekly meets.

“Since starting The Crochet Cafe IOW, sadly the Isle of Wight council decided to cut the role of Local Area Coordination on the Island, but The Crochet Cafe has gone from strength to strength despite this blow, with community members stepping forward to help run the initiative and keep the groups going.

“Hats, scarves and blankets for the homeless community, bonding squares for neonatal units, and pet blankets for local rescue centres are all causes we have contributed to; our aim being to focus on helping those in need on the Island first and foremost.”

There are now five venues on the Island, with plans to extend further. Sally explains they’e been fortunate enough to receive support from Tesco and local shops such as Isle of Sweets – Wool & Craft Centre.

NHS England Alliance Excellence in Health Creation award
So impressive is the impact of The Crochet Cafe, that in November 2018 it was 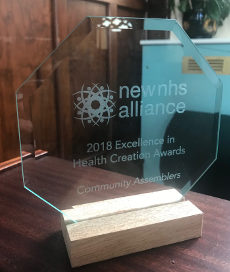 awarded the NHS England Alliance Excellence in Health Creation award of Community Assemblers, having been chosen by a team of judges.

Some members experience challenges with their physical and mental health, but many have reported a boost in mood, motivation, a reduction in their anxiety and/or depression, and a reduction in the medication they need to take.

“The Crochet Cafe IOW brings people together whose paths may not normally cross, but who share a similar interest. When funding for Local Area Coordination was cut, it was a worrying time for the cafes, but the community stepped up to ensure the great work we’d been doing continued.

“They are an absolutely amazing group of people – a true inspiration – and I’m honoured to be part of such a fabulous initiative.”

Join or find out more
If you’d like to join one of the Crochet Cafes, you can find them on Facebook, and they’ll also be at various summer fairs on the Island this year selling items their members have made to raise money for the cafes.