It’s hard to comprehend the twenty years of pain the family of Damien Nettles have been through. This petition calling on the government to allocate proper funding to search for what the family believe will be Damien’s remains needs another 6,000 signatures before 9th February. Can you help? 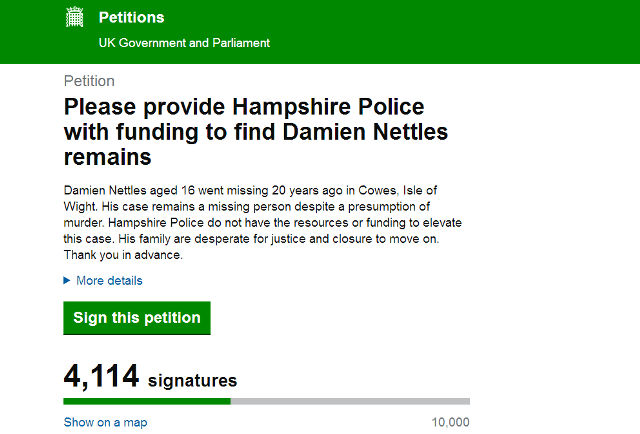 There are just eleven days to boost the number of signatures calling on the Government to allocate more police funds in the Damien Nettles case.

In order for the petition to trigger a formal response from Government, it needs to reach 10,000 by 9th February. The number currently stands on 4,114 signatures.

Isle of Wight teenager, Damien Nettles, disappeared without trace on 2nd November 1996. His family have fought for twenty years to get to the truth behind his disappearance.

They believe he was killed and buried in Cowes, but a catalogue of alleged errors by the police – CCTV evidence ‘disappearing’, evidence being shown to witnesses, etc. – has meant they are no closer to the truth twenty years on.

Dig for Damien
A very small team of loyal supporters have been digging for several years at a site where they believe Damien was buried.

Hampshire police do not have the resources to help, but after success in securing extra funds for other cases (such as the Ben Needham case), International Human Rights lawyer, Ian Brownhill (pictured right), has agreed to join the team.

Petition to release more funds
The online government petition set up calling extra funds to be released to the police for the Damien Nettles case, Operation Ridgewood, has attracted 4,114 signatures.