You can help by contributing to a reward fund to find out what happened to Damien Nettles. Any amount helps

Many thanks to Valerie Nettles, mother of missing teenager, Damien, for getting in touch with VB to share this news. In her own words. Ed 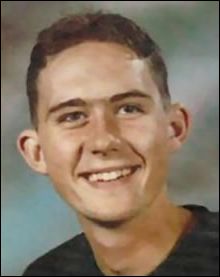 The Nettles family have taken it upon themselves to try to raise funds for a reward that will lead to the arrest, conviction and recovery of their son, Damien Nettles remains.

We feel that there are answers to be found on the Isle of Wight.

We believe that there are still people with information about what allegedly happened to Damien and who have not come forward.

We hope that by offering a reward, we can encourage those people to agree to give a statement about what they know. Only by their coming forward can we progress this case to a conclusion.

Actively dissuaded by Police
We have wanted to do a reward by conventional methods and in conjunction with police/crimestoppers for years but have, we believe, been actively dissuaded from this by the police for their own purposes.

However, they have said they cannot stop us from doing a reward, so we are taking this opportunity to try.

Thank you to everyone for your continued support/contributions.

In the eventuality we are unsuccessful getting the required results, we will distribute any funds to UK based charities that deal with the missing issue.

One person still on bail
Four of the five suspects arrested last year on suspicion of murdering missing Isle of Wight teenager Damien Nettles in 1996 were released earlier this month.

A 38-year-old man from Ryde, Isle of Wight was re-bailed until March 7, 2012 pending further enquiries.

What a good idea. I hope that this will lead to Damien’s family getting the answers they deserve and finally being able to move on with their lives.

What will happen to the money if he is never found and no one is ever convicted?

As mentioned in the article, it will go to a Missing persons charity to help others in the same position.

What does “actively dissuaded from this by the police for their own purposes” with regard to the reward, mean?

Vote Up00Vote Down
Mr J
It is a good idea, but this seems an odd way to raise a reward fund? I thought you would normally get people (perhaps a newspaper) to pledge money in the event that it lead to an actual conviction? That way, no-one pays out anything until a conviction is gained. It is easier to get pledges this way. Paying out in advance is tougher and to my… Read more »
Vote Up00Vote Down
Diane Major

The police were probably concerned they would be flooded with calls from people with mere heresay and gossip rather than hard facts and evidence.

It is a good idea to offer a reward but I agree, it would be better to have had people pledge their cash.

Vote Up00Vote Down
Valerie Nettles
To clarify the reward the way we are doing it – we have asked the police several times and they did not want to do it as they said it would bring out more people and statements and they say they have enough. In the CP several years ago a concerned citizen approached companies on the IW for ‘pledges’ but according to what I have been told… Read more »
Vote Up00Vote Down
Rachel Beer
It is a great idea – and in the sad event that nothing turns up, by having donated to this fund we will at least know the money is going to be put to good use helping other families in the same situation! I strongly hope that this will lead to more info. The the reward will ONLY be paid out if info leads to convictions and… Read more »
Vote Up00Vote Down