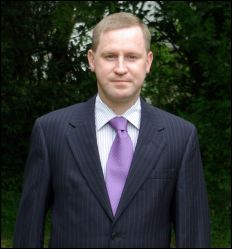 Daryll has lived in Wootton for the last 25 years. He attended local schools and the Portsmouth University. He has many interests and has been active in several local charities and organisations. He currently manages the RSPCA charity shops across the Island.

Daryll believes very firmly in democratic principles, his main argument is that the people’s wishes must be listened to properly. This is why he is standing, to give people a voice.

Priorities set by the voter
The most important people are the general public themselves. You should get the chance to influence decisions on a regular basis, not every four years at election time. I propose locally elected boards for Health, Education, and the Police.

This way the priorities are set by you the voter rather than by people hidden in a room somewhere. I also propose local referenda on important issues such wind turbines or large developments like Pan Meadows. We must listen to the people and take on board their views.

PFI not the answer
Ever wondered why it takes so long to drive anywhere on the Island? And then if you do ever get there you get charged a fortune to park. The roads are a joke and the PFI scheme is not the answer. PFI will load excessive debt on us for many years.

The cost of controlling it will cancel any gains that could be made. Let’s drop this and just invest properly. At the same time we must protect our public transport system. Many people rely on it as their lifeline and we cannot allow them to be abandoned.

Alternative to cutting services
There is a long list of problems that face the council; many of them are caused by the current economic climate. We all see the effects of this around us as amenities are closed and services suffer. I believe there is another way.

We all know that local government is full of galloping bureaucracy. The recent staffing cutbacks were botched and failed to deliver what we all want; the preservation of services while reducing overheads. I propose a review of the cuts by external experts with the aim being the preservation of important services such as Libraries, Toilets, and Tourist Information Centres.

The economy cannot and will not survive on seasonal labour alone. We need to attract investment, and then hold on to it. The younger generations will continue to move away to seek work if opportunities are not provided for them, leaving less and less income to support the older generations.

Emergency services control centre on the Island
The primary duty of all levels of government is to protect the people. Having off Island emergency call centres raises the possibility that mistakes will be made through sheer confusion over locations.

I favour unifying all the emergency services into one centre based on the Island and run by people who know where Brickfields is when you mention it.

The individual services can keep their own specialised staff to deal with their own unique challenges, but by putting them all under one roof they will be able to co-ordinate multi agency situations much easier.