Following last night’s big old clear out at the Isle of Wight Conservative Association, here’s what David Pugh’s got to say from the top seat. OnTheWight also asks Chris Whitehouse a series of questions to see if he’ll back up his talk with actions, re: exiting the Conservative fray? 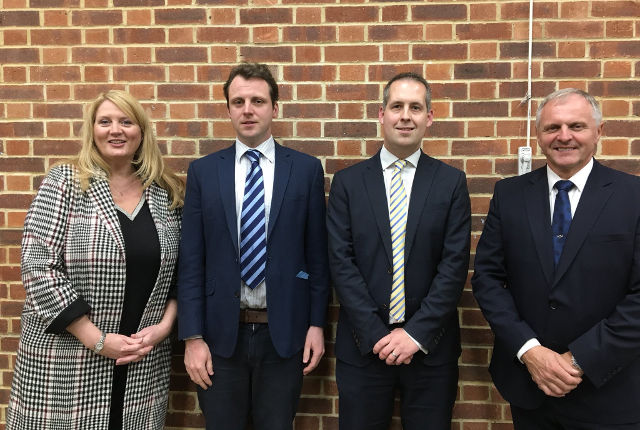 OnTheWight understands that former Chairman, Ian Ward, could have stood for another year.

“The Association plays a crucial role in promoting the Conservative cause here on the Isle of Wight.

“We are fortunate to once again have a Conservative-run local authority and a Conservative MP in support of a Conservative Government. IWCA will continue to support Cllr Dave Stewart (and his fellow elected members) and Bob Seely MP as they work hard to deliver improvements for the Island.

“In terms of the Association, the Officers will seek to build on what has been achieved by Ian Ward and his team. We will focus on strengthening our membership and fundraising efforts to ensure we are ready for future campaigns – particularly for local and general elections.”

Whitehouse to leave the Conservatives?
At the beginning of the week, Isle of Wight councillor for Newport West, Cllr Chris Whitehouse, issued a press release swearily-declaring:

“Along with many councillor colleagues, I would find it impossible to continue to serve as a Conservative if the man who wrecked the Island’s education system so comprehensively were elected Association Chairman. It would be an insult to a generation of children and their parents. We’re still undoing the damage he did – damage so bad that the entire Island school system was put into special measures by the national Government. This wouldn’t be a joke, it would be a nightmare and would divide and risk completely destroying the Conservative Association. I’m not surprised Pugh has kept his plan secret until the very last minute. It’s bl**dy typical.”

“If Cllr Whitehouse wishes to resign from the Conservative Group that is a matter for him. I intend to meet with Cllr Dave Stewart in the near future, and no doubt this matter will be discussed.”

Clarifying Cllr Whitehouse’s claims
To try and ascertain what Cllr Whitehouse meant and what actions may follow, OnTheWight has written the following to him today:

You issued a press release earlier this week where you stated, “Along with many councillor colleagues” that you “would find it impossible to continue to serve as a Conservative”, if David Pugh gained the position he has. Would you please answer the following:

Update 10 Apr 2018: As yet, OnTheWight has received been no response from Cllr Whitehouse, but he did issue a statement on the Saturday after the new appointments where he claimed he would be, “suspending all my active involvement with the Isle of Wight Conservative Association for a minimum period of 6 months”.

How this addresses Cllr Whitehouse’s previous statement that he, “would find it impossible to continue to serve as a Conservative,” while David Pugh was Association Chairman is unclear.

As yet, there’s been no public statement from the “many councillor colleagues” that Cllr Whitehouse held the same conviction.

We’re DOOMED…..DOOMED I tell ya! What next for what is left of our Island… County Hall painted blue, Blue road lines instead of yellow.. Paint the trees blue and a 20mtr statue of ‘The great Destroyer’. Private Eye… Fill yer boots,, it’s all yours!

Given that there is nothing going well on this Island at the moment – I look forward to seeing what Pugh can make worse.

Block8, be *very* careful what you wish for!

Mr Pugh as I know from experience, frequently is very adapt at saying one thing and doing another. I for one will be looking to place my vote , when required, elsewhere

Vote Up74-48Vote Down
the auditor
Quote from Mr Pugh: “We are fortunate to once again have a Conservative-run local authority and a Conservative MP in support of a Conservative Government.” There are a large number of Isle of Wight residents who would strongly disagree. The Isle of Wight is heading for a landslide into disaster. MR Pugh has a poor track record, perhaps there is a shred of a chance he might… Read more »
Vote Up74-53Vote Down
Rupert Besley
Ten years ago Mr Pugh, as Chairman of the Island Strategic Partnership 2008 onwards, made the following promises (among others and similar): Island promises 2008-2020 We will: – ensure our children achieve better than the national average at school and college… An inspiring island: (by 2020) the majority of Island children and young people make better than average progress in school and achieve results at 16 that… Read more »
Vote Up85-49Vote Down
Rupert Besley
Just to make clear, these, above, are all direct quotes (no words altered) from the glossy booklet signed off and published by Mr Pugh as Leader of the IW Council in 2008. They are all laudable aims. But, ten years on, we are in a good position to judge their worth as promises. (Or, of course, we can bury our heads in the sand, click the down-vote… Read more »
Vote Up87-37Vote Down
rosey

Who could predict the massive downturn in the world economy though?

Vote Up3-37Vote Down
Rupert Besley
Well, I could and did, and I know very little about such things. Tides come in and tides go out. Recessions, including global, are part of the landscape and politicians have the job of acknowledging such truths. That of 2008-09 began in 2007 and followed that in America of 2001-02. Responsibility for the present state of Island education lies closer to home than any blip in the… Read more »
Vote Up46-2Vote Down
tr2015

I strongly disagree that IW roads have suffered. It is a pleasure to drive around this island. Compared to the mainland where one has to be constantly on alert for potholes, Island Roads have done a fantastic job. I appreciate they have not completed the task, but the main roads are strikingly better than those over the water….

Vote Up13-19Vote Down
ThomasC
You realise that the funding of the PFI roads contract was ring-fenced, so whilst our other services have been cut to the bone and people on the margins have suffered greatly, as funding has been slashed repeatedly, the Island Roads contract has been maintained at the level set by the Tories, whether it was affordable, or sensible to do so. Just remember that as you’re enjoying your… Read more »
Vote Up14-8Vote Down
tr2015

Yup, I get that ThomasC, although my understanding is that it was money from government, specifically ring fenced for the roads, and was money that we wouldn’t otherwise have got. So it is not depriving the our schoolchildren, or our pensioners, or anyone else.

Vote Up6-4Vote Down
electrickery
Of course the roads are better. IWC did criminally little maintenance in the years leading up to the PFI, so any work has to be an improvement. That it has all happened within a short few years just makes it more obvious than similar amounts of work on the mainland that have to be spaced over budget cycles. Now watch how these shiny new surfaces and their… Read more »
Vote Up4-1Vote Down
I do not believe it

I climbed onto my Time Machine last night and whizzed forward to December 2018.
Apart from picking some runners and winners out of the newspapers (so I can boost my meagre pension by placing some strategic horse racing bets) I noticed the following headline in the IWCP:-
‘David Pugh (aka ‘The Kiss of Death’) oversees collapse of IW Conservative Association’.

Looks like the “Usual Suspects”, where Koyser Soze finally made the line up (2nd from the Right)

I think we need someone to resolve the infrastructure issues on the Isle of Wight in total.

I feel a caption competition would be appropriate.

How about “Spot the ball competition”?

Did you omit a plural there, Colin?

I read on another local news feed (after wading through the plethora of adverts) that Cllr Whitehouse has indeed stepped aside (well, almost) from IW Conservatives. So all credit to him – now let’s see how many of his “several colleagues” follow his example.

Is that really the best they could find?
Worrying.
Obviously was always the plan.

No, because someone must have thought Cllr Ward the best before he stood down. Now that’s even more worrying.

Vote Up5-1Vote Down
ThomasC
I think it’s great that the IWCA have acted in such a forward thinking manner and elected a staunch proponent of remaining in the EU to chair the IW group, ready for when the negotiations to leave collapse and the country needs to re-development its relationship with the EU. Maybe he can nip up to Notts and have a chat at home with our Europhobic MP to… Read more »
Vote Up8-16Vote Down