The story of Barbara Cooke’s death is at the centre of a national investigation into the health watchdog, the CQC. It took a year from her death until the CQC inspected the care home she resided at. 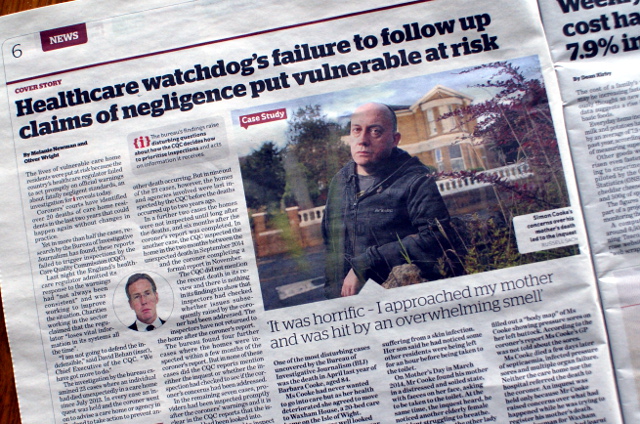 Hidden amongst the media coverage of Syrian refugees last week was an expose by the Bureau of Investigative Journalism about the CQC’s “failure to follow up claims of negligence” at care homes.

At the centre of the investigation is the case of Barbara Cooke, a former Isle of Wight care home resident, whose death last year, the coroner concluded, was contributed to by neglect. The Bureau of Investigative Journalism (BIJ) got in touch with OnTheWight having seen our article reporting the findings of the Coroner’s Inquest last year.

They were keen to interview Mrs Cooke’s son, Simon, as part of the their investigation. The report appeared in National Newspaper of the Year, i, in a two-page spread of The Independent, as well as on the Express Website and the Bureau’s own Website (links to all articles).

Simon Cooke: “It was horrific”
The report by Melanie Newman explains how on Mother’s Day last year, Simon found his Mum at Waxham House care home in Ryde in a distressed state and soiled state with faeces on her face.

“It was horrific,” he told them, going on to explain that his Mum died just a few days later of septicaemia, infected pressure sores and multiple organ failure.

The inquest was only held because Simon reported his mother’s death to the Coroner, something the care home or hospital had neglected to do.

CQC inspection found same problems a year later
It took a year from the death of Mrs Cooke to the CQC inspecting the care home in Ryde.

When they did, many of the same problems that had been in place at the time of Mrs Cooke’s death were still evident.

“I’m very disappointed that the CQC took so long to inspect Waxham House after the damning Coroner’s report and even more concerned that when they did, they found the same problems present as when my Mum died almost 18 months ago.”

The CQC rated the care home as ‘Inadequate’ in June 2015.

The outcome of a Serious Case Review by Adult Safeguarding at Isle of Wight council is due to be published at the end of the month.

The coverage
If you don’t buy the i, you can read the online reports of the investigation.

The Independent: Why the son of a woman who died as a result of care home neglect is still angry

The Express: How can we have any faith in care home standards?

newest oldest most voted
yjciow
We have written to the CQC to complain about their Inspection Report which did not reflect what we have found at the home over the last four years. We are very sorry for the family’s loss but do not really understand what the continued agenda of persecution for the home is achieving. Not helped by the negative article in the County Press. All that does is upset… Read more »
Vote Up00Vote Down
Disrespectful
“Persecution”? The Coroner found that this woman’s death was contributed to by neglect. Neglect! If you found out your parent, whom you had entrusted to someone else to care for, had died and the Coroner (if they were lucky enough to be informed) found their death was contributed to by neglect, would you feel that bringing the neglect to the public’s attention was persecution? I doubt it.… Read more »
Vote Up00Vote Down
BRIAN
As a volunteer with an organisation which helps aged people, I see at first hand the standard of care, or lack of it, from the low paid,rushed, “quick in and out” brigade. Given that the same, low paid, low motivated type of staff work in care homes,I am not in the least surprised at this article. Two quotes. “Simon found his Mum at Waxham House care home… Read more »
Vote Up00Vote Down
Simon Cooke
Just before this article was published, I told Sally to expect the shill from Waxham House. You are, once again, embarrassing yourself. Let me make it absolutely clear: the owners and staff of Waxham House did not dispute my evidence in court. They were unable to defend themselves at all, hence the damning verdict by the Coroner. I would also like to point out that the owners… Read more »
Vote Up00Vote Down
kazg
I am Simon Cooke’s partner. I was also present on the day that this happened, and I can confirm that Mrs Cooke did indeed have faeces on her hands and her face. It was not known how long she had been in that state, and it was more than two hours after we arrived before she was actually taken to the toilet. The reason for this was… Read more »
Vote Up00Vote Down
JB
Simon, how sad, and distressing for you, and your family. I hope all involved manage to remember a wife, a mother, and a loved family member endured an awful end to their life, and try to show respect. Not conduct a damage limitation excersize, but a tad to late I gather. IOW Radio involving themselves in such a sensitive issue, and if I read it correctly, from… Read more »
Vote Up00Vote Down