DECADEaNCE event raised over £12,000 for Mountbatten

Tony Martin’s events have raised around £80,000 for Mountbatten in the last ten years. 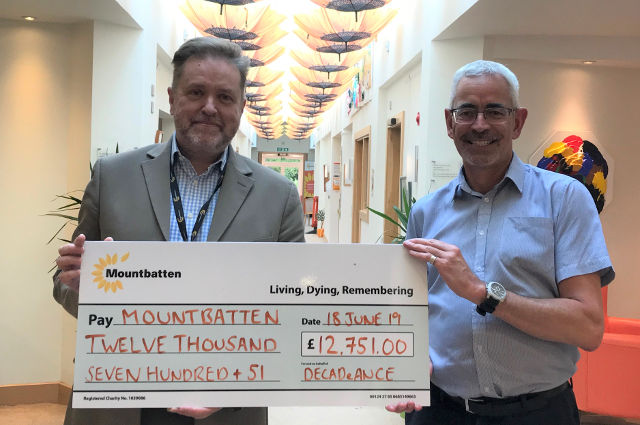 A record total raised at last year’s DECADEaNCE has been officially presented to Mountbatten.

Themed event
ony celebrated ten years of DECADEaNCE by welcoming a record 850 people to the event.

Different themes from the last decade all featured including James Bond, carnivals and space.

Tony, whose mother, Eileen, was cared for at Mountbatten in 2001, said,

“To celebrate a decade of DECADEaNCE was very special.

“I never imagined it would become so successful but it gives me huge satisfaction to organise this event in support of Mountbatten.”

Around £80,000 raised in ten years
The latest donation takes the overall total raised by Tony through DECADEaNCE to around £80,000.

“Tony’s support for us over the last ten years has been incredible.

“We’re hugely grateful for everything he has done for us – it’s an amazing amount of money which has helped us continue to support more people experiencing death, dying and bereavement.”

This year’s DECADEaNCE will take place on Saturday 5 October at Cowes Yacht Haven.

Ticket details and this year’s theme will be revealed early next month.