Find out where the six locations are that will be used by the Dinosaur mobile phone app we revealed back at the start of March. 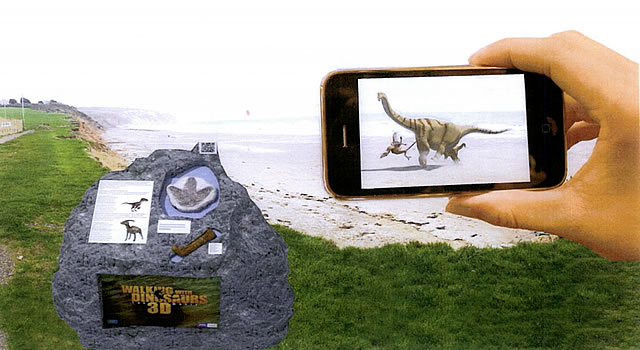 The six locations of the proposed ‘Meteors’ for the Isle of Wight Dinosaur Island App have today been revealed through the public release of the planning applications.

OnTheWight broke the story of the mobile phone app back at the beginning of March, highlighting the Augmented Reality element of the app. The planning application includes a mock-up of what the app might look like.

Size
The ‘Meteors’ will be sculpted from polystyrene, then coated with a resin shell, measuring 1.25m wide, with an overall height of just over a metre. The top will angle down to 0.8m. The 50Kg structures will contain a metal frame and will be bolted to the ground. 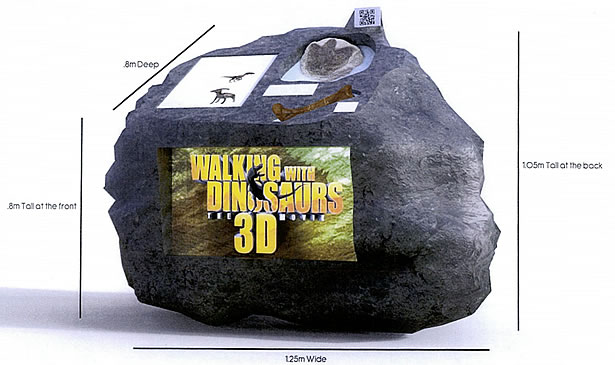 Application
The application is signed by Simon Dabell, under the company name Visit Isle of Wight Ltd, with the following description:

The proposal is to site 6 dinosaur heritage markers located along the south and south-west coast of the Island, in specific accessible view-points in order to create a heritage trail, linked with ‘Walking with Dinosaurs’ the 3D movie. The primary feature of each marker will be a built-in AR feature so that visitors can take photos of the dinosaurs that lived on the Island, alongside themselves. This trail is an inclusive element of the Island’s 2013/14 marketing campaign.

So we visited the three most easterly meteots and they seemed to have been removed? Very unhappy son :(
Is the app now defunct?
Thank you for clarifying,

Vote Up10Vote Down
Darcy
Great idea and hope it proves very successful. However at the risk of being flamed for being an anorak, these artefacts can only be pseudo ‘Meteorites’, the metallic (mainly iron) remnants of ‘Meteors’, which create the flaming streaks of light in the sky as they enter the Earth’s atmosphere. They only become ‘Meteorites’ once they reach the ground. The extinction of the dinosaurs is widely believed to… Read more »
Vote Up00Vote Down
Bystander

Do we need this plastic tat? The Island has the real deal so hardly needs this breakfast cereal stuff. The phone appears to show a dinosaur running on the beach but the area would have been miles inland when the dinosaurs were there wouldn’t it?

I agree there is a strong ‘plastic tat’ alert here, that the – dinosaur poo? – might spoil attractive scenes in and of themselves, let alone when they attract vandalism and just look sordid.

Also, isn’t this yet another reason for people, particularly children, to stare into an app instead of looking around themselves at the real scenery, and (gasp!), use their imaginations.

Switching on technology can become easier than using the imagination, and burying the face in a screen becomes second nature. Apps are there to make money, not to encourage children to use all their senses…

a happy medium is what is missing today

@no.5 a happy medium, and plastic meteors, sorry Darcy meteorites

if half of the kids who use the app then go on to vist Dinosaur Isle, look up dinosaurs on the Internet and go looking for fossils on the beach it will all be worth it

Good point Darcy. If they get the basics wrong, it undermines the whole project.

It would, Dragonfly. It then beccmes telling people what they want to hear, a kind of Disneyfication of our coastal history.

Vindicated by no less an august organ as the County Press which refers to the artefacts as ‘meteorites’. Thought I was alone against the world on that one!
Phew! I can move on now!!

As you’ll see we used quote marks around the term ‘meteors’ as this was the term used in the planning app.

Where else other than OTW would anyone visit to seek informed opinion and facts? ;-))