Well done to all the crews from the Ryde Rowing Club who took part in not one but two Regattas at the weekend, including hosting one in Ryde. 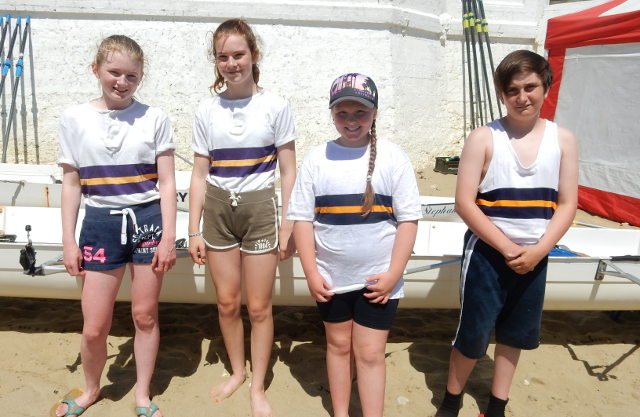 The Regatta had an entry of one hundred and two crews and scullers from the twelve participating clubs – including the hosts Ryde – and the two other Island Clubs – Newport and Shanklin.

This lead to a packed program of nineteen events over the 1,890m Ryde Regatta course – which runs from Appley Beach out towards Ryde Pier where the crews and scullers make a racing turn before racing back to Appley.

For the Ladies there was racing for seniors, Coastal Juniors and Masters plus Coastal Junior Pairs and Coastal Junior and Novice Single Sculls. There was some exceptionally close racing in conditions that were sometimes difficult – especially for the single scullers.

Support from sponsors
The Club are indebted to their main Regatta Sponsor TLM Laser, who’s representative Director Mandy Toms presented the prizes at the end of the Regatta and to the other event sponsors and for the support of the Isle of Wight and Ryde Town Councils.

In particular, thanks go to Ryde Inshore Rescue who provided the safety cover afloat and had a busy afternoon dealing with five single scullers who overturned.

Best performances
The best performance for the Wightlink-sponsored Ryde Club at their own regatta surprisingly came from the Smith brothers – Joel and Austin – racing for the first time together in a Coastal Men’s Junior Pair where they finished in second place, just half a length behind the winners.

The Club had a second Men’s Coastal Junior Pair of Tom Starkey and Josh Lee – both J16s who were racing in their first ever Championship Pairs Race, finishing in seventh place. Joel also competed in the Men’s Coastal Junior Sculls event, his first race at this level following his promotion after his Novice win at Lymington Regatta – and produced an impressive performance to finish in third place. The Club also have a Novice Sculler competing – Ben Sanderson – who was well placed at the turn where he unfortunately capsized in the difficult conditions.

The Men’s Novice four of Austin Smith, Ben Sanderson, Tye Cameron and Josh Lee coxed by Daniel Sanderson, whose performances and confidence has been growing as the season progresses finished third in their final after challenging for the lead throughout the race.

Shanklin Regatta
On the Sunday, at Shanklin this crew – with one change – Tom Starkey replacing Austin Smith – produced another fine performance finishing in second place just a canvas behind the winners – as they close in on a Novice win.

Austin Smith meanwhile competed in the Men’s Novice Sculls finishing third in his heat to claim a place in the final where he finished sixth. His brother, Joel competed in The Men’s Coastal Junior Sculls again but found the going a little tougher than the previous day – finishing in fifth place and the same fate befell the two brothers on the Men’s Coastal Pairs event where they could not repeat the heroics of the previous day finishing in sixth place.

The Club also had a J14 Coxed quad racing consisting of Bonita Hunnybun, Poppy Starkey, Emily Davis and Daniel Sanderson – with Graham reeve in the coxswains seat once again – all making their competitive debuts for the Club in an H&D Regatta and they rowed superbly to finish in second place – a performance that was all the more impressive as we believe that with an average age of just twelve they are possibly the youngest ever crew to represent the Club.