Chair of the Solent LEP was on the Politics Show on Sunday talking about the unsuccessful bids for the Island.

Just under two weeks ago, the Isle of Wight council discovered that two of their bids with the Solent LEP for grants from the Regional Growth Fund (RGF) were unsuccessful. As we reported at the time, Vestas were successful in their bid. 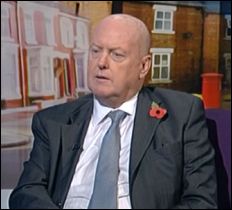 Two bids for the Island, one for an Ocean Energy Centre and another to boost tourism businesses had been put forward, but sadly unsuccessful for a second time (Background on first).

Solent LEP chair on Politics Show
The Solent LEP had put forward six RGF bids with funding being won on four of them, securing £113m of funding from a £1.4bn Government pot.

Doug Morrison, chair of the Solent LEP who also runs the ports in Southampton, was questioned by Peter Henley about the Solent LEP’s commitment to the Isle of Wight.

Going on to say, “We’ve got deprivation in Southampton, deprivation in Portsmouth and severe deprivation in some quarters around the Gosport area and some real problems on the Isle of Wight. Notwithstanding all of that, we have to understand that the South East is the engine room for the UK economy and we need to support that.

“Not good enough for the government to say there’s a north/south divide and we’re going to pump all the money in the North and we’re absolutely delighted that round two has been so successful.”

Strengthen our links with Government
In response to the news about the unsuccessful bids, Isle of Wight Council leader Cllr David Pugh said, “We are disappointed these bids have not been successful. Both were credible projects that would have made a real difference to two important areas of our economy.

“We will now discuss with Regional Growth Fund officials why the bids were not supported. We must also look to strengthen further our links with Government to ensure we are as well placed as we can be to attract national investment in the future.

“In the case of the Solent Ocean Energy Centre, we will now explore new ways of developing the scheme. Not only has this project attracted interest and support from the alternative energy industry – both at home and abroad – we have also been offered significant financial backing from the private sector.”

We’ll let you know once we hear whether any bids are being submitted that will benefit the Island.

newest oldest most voted
adrian nicholas
Does the comment above , indicate that a body with a major soton. private port, ABP, as chair will represent the iow comparitive to S.oton and Pompey; ‘Doug Morrison, chair of the Solent LEP who also runs the ports in Southampton, was questioned by Peter Henley about the Solent LEPâ€™s commitment to the Isle of Wight. â€œDisappointing we didnâ€™t get the Isle of Wightâ€ â€œItâ€™s disappointing we… Read more »
Vote Up00Vote Down