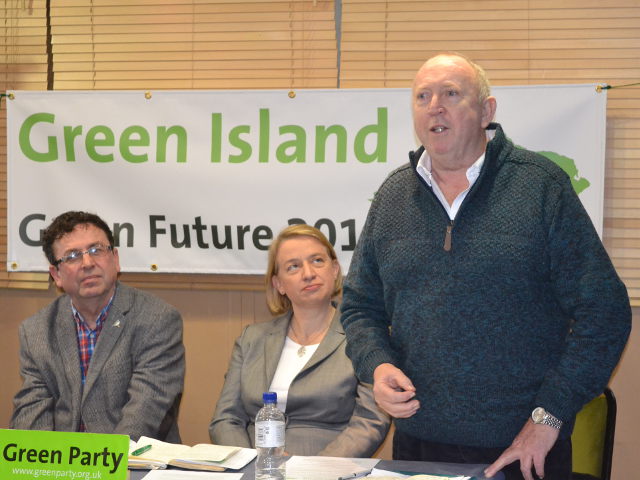 Daniel James from the Isle of Wight Green party shares details of this upcoming event. Ed

This public debate will be a free event for all Islanders. Tickets will not be required, although seats can be reserved on a first-come, first served basis, due to limited seating in the theatre.

Invitation to Brexit campaigners
In January this year, all Island political parties were invited by UKIP parliamentary candidate Iain McKie to participate in a public debate on the EU referendum.

At the current time, only the Isle of Wight Green Party has responded positively to this challenge. The Green Party now issues an open invitation to ‘Brexit’ campaigners to nominate their speaker for the debate in Newport on 1st April.

Taylor: “Britain is better off in the EU”
Keith Taylor, Green Party MEP for the South East constituency which includes the Isle of Wight, will present the case that Islanders should vote to remain in the European Union.

“Britain is far better off in the EU, working with our neighbours on the shared challenges we face. The Government continues to drop some heavy hints about what would happen if we quit.

“The Chancellor believes the EU nature laws place ‘ridiculous costs’ on British firms and has just delivered a Budget promising to lock Britain into fossil fuel dependency, while Ministers are trying their best to water down air pollution rules.

“Most worryingly of all, the Government continues stripping away support for clean energy and renewable technology.”

To reserve a seat for the debate, please RSVP to [email protected]

Your pretty safe from migrants on your island….

Yes, we are safe, since migrants are not especially dangerous…

Vote Up00Vote Down
nbelfitt
This man is not even a Islander so what will he know what will be best for the island? I support the in campaign being a Lib Dem, but if we are going to win this argument on the Island, we need Islanders who know about this place and about the effects leaving or staying will have. Not parachuted in big whigs trying to score some political… Read more »
Vote Up00Vote Down
ewald

Keith Taylor,our Green Party MEP for the South East fought for jobs on the Island with Navitus Bay….
UKIP was against Wind turbines and Farage helped Hikley Point C
http://www.theguardian.com/environment/2014/sep/28/hinkley-point-new-nuclear-reactors-deal-europe

Snouts in the trough not voting for Christmas? Who’d a thunk it. . .

Vote Up00Vote Down
Amberlight
So is Ian Mckie from the Island ? its an EU debate not an Island debate and Keithh is the Green MEP for the South East ,so this is his patch and he was voted in fair and square, he also works in Brussels at the EU parliament ,so I believe he is the correct person to join the EU debate on the Island seeing as though… Read more »
Vote Up00Vote Down
nbelfitt
And that is why I wouldn’t get people to listen to Ian. But at least Ian has lived here for a bit and knows that the Island is different to the main land. What I am saying why is there a need for him to come down and try and challenge the Island out. If he was coming down to talk to Green voters or be part… Read more »
Vote Up00Vote Down
Vix Lowthion
“Liberal Democrat Isle of Wight INtogether are more then happy to send a ISLANDER pro-EU speaker to be part of it, which they refused so far” I am unaware of any specific offer of a speaker or in fact when any speaker has been rejected. As I stated earlier – everyone is welcome at this event! And if there is a particular format you have in mind,… Read more »
Vote Up00Vote Down
Vix Lowthion

Nicks comment was helpful to me Vix and if what he says is correct then we should know. If not then take him to task and tell us where he is wrong.

Also Greens are part of the Island in campaign in fact they started it along with cross party representatives.
Please keep up and get your facts right nbe

The greens are part of it, and at that meeting which I attended they agreed not to make it a political platform and would work together.

Yet that seems to have been completely forgotten. Solidarity working on a non-party platform and then they do this.

How can you trust a party that saids one thing and acts another way?

Thought everyone would be joining in ?

For the EU debate we needs Europeans to speak up-not the Greens. I will be voting leave-but that does not mean that I do not feel european culturally…just not economically or politically.

another non event. the debate isn’t about what is best but about democracy and self determination. the eu is run by aparatchiks appointed by politicians feathering nests.

Vote Up00Vote Down
Vix Lowthion
Everyone can join in. This is a public meeting, called at short notice due to availability, and everyone is welcome. Nick – this isn’t helpful trying to put people down in a public forum. The Island Staying In campaign is yet to launch, and we were offered a date of availability for our local Green MEP. Everyone is welcome – including both sides. There will be clear… Read more »
Vote Up00Vote Down
Amberlight

I think that Nik needs to calm down? its not an election its a debate for everyone?

Hopefully the meeting will be attended by more than the 5% of Islanders that could be bothered to turn out to vote for the Greens and LibDems in the 2014 election .

It will be interesting to know how many attend.

We cannot fit 5,000 people in the Anthony Mingella theatre!

But you can count the number who attend Vix and tell us! :-))

Vote Up00Vote Down
Cicero
I didn’t explain my point properly Vix. It is that less than one third of the Islanders could be bothered to vote in the EU election (and that is twice the probable turnout for the forthcoming PCC election!). Overall Greens and Libdems together received 5% of the registered electorate’s vote. Or from another point of view 95% of Islanders could not give a t*ss about the EU.… Read more »
Vote Up00Vote Down
Oldie

Who on earth is this ‘Nick/Nik’ you politicians are referring to? I thought Onthewight comments were for the general public to read. You seem to be having your private party political squabbles online.
Meanwhile the rest of the electorate have a referendum to vote for in June.

Vote Up00Vote Down
Daniel James
For clarification, Nick Belfitt is a local Lib Dem activist. Nick, I am chair of the Isle of Wight Green Party. I’d like to set the record straight about this debate in Newport on April 1st, as you don’t seem to be in possession of the facts. On the 12th January this year, Iain McKie of UKIP emailed all Island political parties, including the Lib Dems, inviting… Read more »
Vote Up00Vote Down
sam salt

Thank you Daniel for your very clear response. I now understand the facts. The only thing I would say is that other MEP’s do visit the Island, but that’s for another day.
The “Out’s” seem to have got their campaign moving. I am an “In” and am very disappointed that those of the same persuasion as me have not been as organised with their campaign.

Vote Up00Vote Down
nbelfitt
Daniel James, just to be clear, I have been in contact with the whole party and no such invitation was brought towards us at least towards the Exec. We would be more then happy to send a speaker from our party as part of the INtogther campaign to speak for the EU. We are still open to that idea and agree then get incontact with us and… Read more »
Vote Up00Vote Down
Cicero
Chancellor George Osborne said the rise in the current account deficit meant the UK should not be contemplating leaving the EU. “Today’s figures expose the real danger of economic uncertainty and show that now is precisely not the time to put our economic security at risk by leaving the EU,” he said. Gresham’s Law tells us “Bad money drives out good”. Similarly taking the advice of a… Read more »
Vote Up00Vote Down
Michael Lilley
I attended this event and the 4 speakers,2 for No and 2 for Yes, all made strong arguments. On some issues there was agreement and although at times there was tension there was also good will. The message was every Islander registered to Vote should Vote and in the end democracy will prevail on this issue. I am still committed to a Yes stay in Vote, but… Read more »
Vote Up00Vote Down
Cicero
Good report- thanks! I am pleased that Vix came across strongly as an orator as it will provide a good base or the next General Election. On the other hand I am bemused by the Green Party’s naivety that the EU will change radically and TTIP will be blocked, no matter how many well-intentioned Green and other MEPs would wish it. It flies in the face of… Read more »
Vote Up00Vote Down
Cicero

Cicero makes a good point. How are we going to reform the system of Representative Democracy here or in the EU? It seems to be getting worse in terms of the Westminster Parliament’ effectiveness. I would have thought the unelected Commission and variation of different state representatives in the European Parliament was practically impossible.