There is a growing movement of campaigners looking to protect the Island’s trees, with a Facebook group and petition set up to raise awareness. 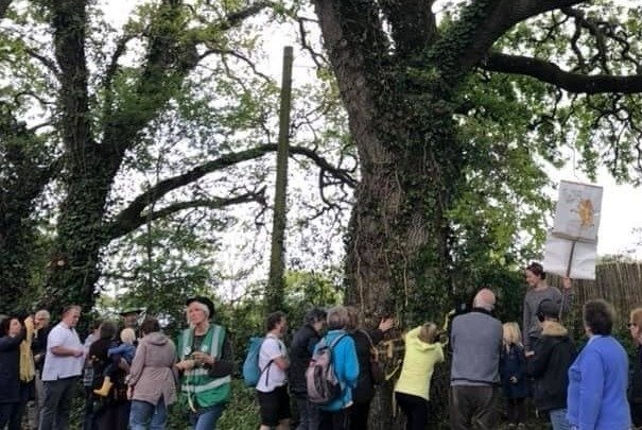 The felling of oak trees in Ryde has upset residents, who say they should be protected.

Island Roads has said it will not cut down a 100-year-old-oak tree in Carters Road, but a number of smaller, diseased, trees — which the contractor said posed a threat to the public — have been removed.

“We do have a duty to keep highway users, including those travelling in double decker buses, safe from overhanging branches and as part of this it has recently been necessary to trim away some young growth from the oak tree.

“This has been done sympathetically under expert guidance and no further work is required to the tree at this time.”

But furious landowners said no effort was made to contact them ahead of the tree felling — something Island Roads has denied.

Cooper: Not contacted as land not registered
Resident Francesca Cooper who has set up a Facebook Group called IW Action for Trees, said:

“My grandfather was not contacted as his land is not registered.

“It seems inadequate that the only check they do is to look at the land registry, which is an incomplete record and also holds out of date information.”

Some trees have had branches removed and others felled entirely.

“It is the responsibility of private landowners to regularly inspect trees on their land and ensure any adjacent to the highway do not pose a risk to the safety of highway users or prevent their right to use the highway.

“We only carry out work after following strict procedures both to identify landowners, via formal land registry searches, who may be responsible for any works required together with specific procedures involving experts to assess any necessary works and to inspect the trees for any signs of wildlife or nesting birds using the trees as a habitat.”

Cooper: Unprofessional and not transparent
Ms Cooper said residents felt Island Roads did not deal with the tree works in a professional or transparent way and has set up a petition to protect the Island’s trees.

“In a time when we are all becoming acutely aware of the importance of our natural environment and species protection we would like to see all trees classified as public assets with a collective responsibility for us all to hold those to account who do not maintain, to the best of their abilities, this priceless resource.”