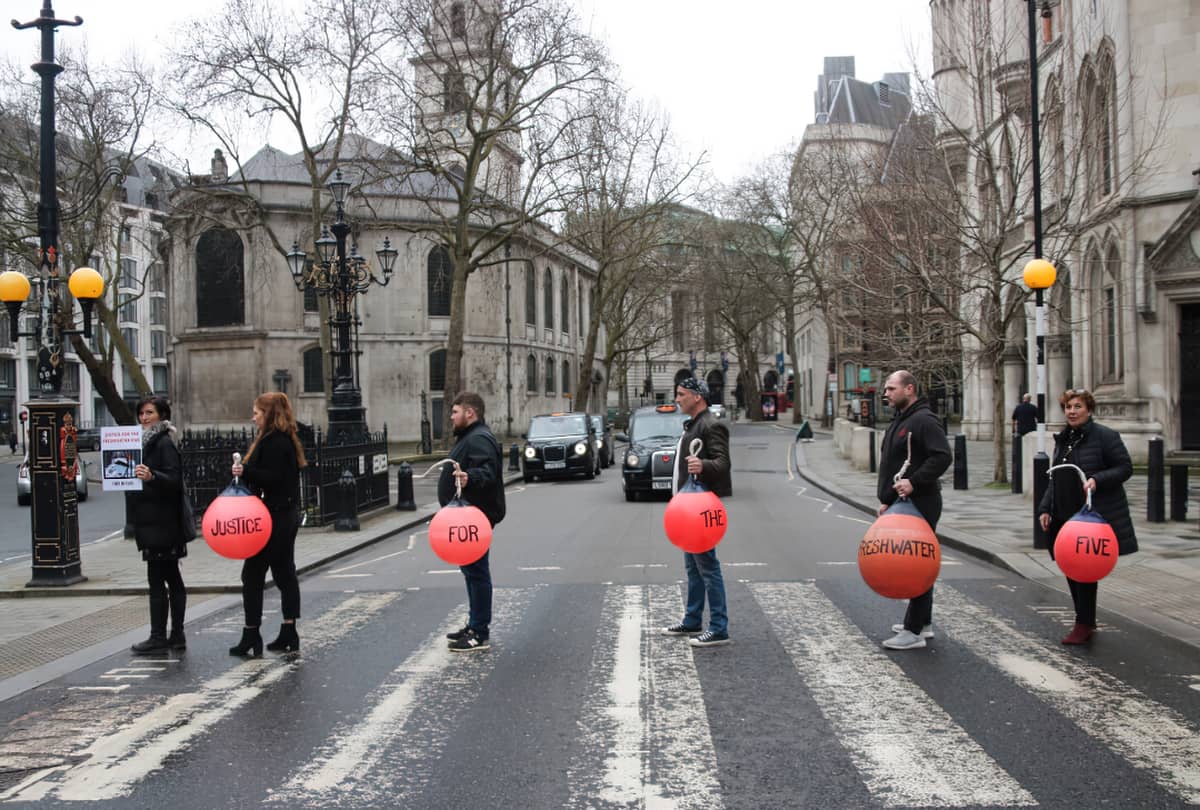 The hearing on an application for leave to appeal for two members of the Freshwater Five concluded on Friday last week.

Judgment is expected to be handed down in the next few weeks.

The Freshwater Five – Jamie Green, Jonathan Beere, Zoran Dresic, Scott Birtwistle and Daniel Payne – were sentenced to a total of 104 years’ imprisonment at Kingston Crown Court in June 2011 after being convicted by an 11-1 majority jury verdict.

Expert evidence
Lawyers acting for Jonathan Beere and Danny Payne presented fresh expert evidence, undermining the prosecution’s case that the men conspired to use a fishing boat to collect drugs from a containership in the English Channel and later deposited them in Freshwater Bay off the Isle of Wight.

“The victims of a heinous miscarriage of justice”
The families of the Freshwater Five have prepared a joint statement:

“This is an anxious time for us all as we await the judgment. The men and their families have been the victims of a heinous miscarriage of justice. To be wrongly imprisoned for ten years for a crime you didn’t commit should be something that never happens in a modern society and exposes a deep and serious flaw in the legal system.

“We hope the Court of Appeal now has everything it needs to finally see the truth – that the men are innocent and should never have been convicted of this crime. We hope that they will act swiftly to set right the wrong that has been done to us and overturn these convictions.

“Absolutely everyone would like to place on record their sincerest thanks to the legal charity APPEAL. We would not be where we are today but for their relentless investigation of the case.

“We also want express our sincere thanks to Joel Bennathan QC and Annabel Timan for their painstaking preparation and advocacy, and to the experts instructed by our legal team who have put in hundreds of hours, working largely for free, uncovering the truth.”

New evidence presented
Over the course of the hearing last week, the court heard new evidence that:

Bolton: 46 years already collectively served in prison
This evidence came to light through the tireless enquiries conducted by the men’s solicitor Emily Bolton, and investigator James Burley of the miscarriage of justice charity APPEAL.

Emily Bolton, Director of APPEAL and solicitor for the five men, said:

“The Court of Appeal heard new and compelling evidence which the Freshwater Five were deprived of the opportunity to present at trial.

“Had the jury heard the evidence in this case as it now stands, we believe they would have reached a different verdict.

“We hope the Court of Appeal will decide that in these circumstances the convictions simply cannot stand.

“Throughout the 46 years they have collectively served in prison, the Freshwater Five have always maintained their innocence. We hope the nightmare experienced by them and their families for what is now over a decade will very soon come to an end.”

News shared by APPEAL in their own words. Ed

newest oldest most voted
Tamara
I’ve listened to all the Guardian’s podcasts about the case of the Freshwater Five. According to Emily Bolton, founder of Appeal, there is a major flaw in our legal system for those fighting perceived miscarriages of justice – ‘Disclosure’. In the US, as a Defence lawyer, she was given full access to the court proceedings in the original trial and all the evidence. In England, only the… Read more »
Vote Up40-16Vote Down
Rowan

As I understand it the prosecution should disclose that evidence. If they don’t then they’re not doing their job properly. I’ll add a link below.