If you have spare time and like running, why not consider getting involved in this new scheme that aims to promote running in the community?

A couple of weeks ago a new scheme was launched by UK Athletics called ‘Run in England’. 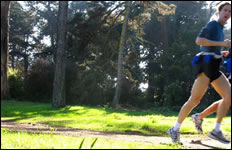 The idea behind the scheme is to encourage people of all ages to get involved with recreational running in community groups, as part of a fitness programme.

Get on-board and become a leader
The Isle of Wight Council tell us that they’re supporting the scheme and appealing for adults with an interest in running to sign up for a one day training course that could result in them becoming ‘Run in England’ Leaders.

Since the launch was announced on the Island, we hear that nine people have already expressed an interest in becoming leaders, and the course is being planned to take place in February (more details when we have them).

Do I need to have running talent?
A little bit of running experience (not to mention bags of enthusiasm) will be handy, but don’t need to be a Roger Bannister.

If you take complete the course being organised by The Sports Unit, you’ll receive not only a qualification, but also a leader’s licence and insurance.

Lee Matthews, Isle of Wight Council Community Development Manager said: “Running is a hugely accessible and enjoyable way of getting active and keeping fit. We hope to attract enthusiastic leaders who will share their passion for running with people taking their first steps in the sport.”

Image: Orin Zebest under CC BY 2.0