Festival of Running: Another successful event with nearly 800 entrants

Clare of WW Sports and Community Centre said, “The festival was a huge success, thanks to our magnificent runners, sponsors, marshalls and staff.” 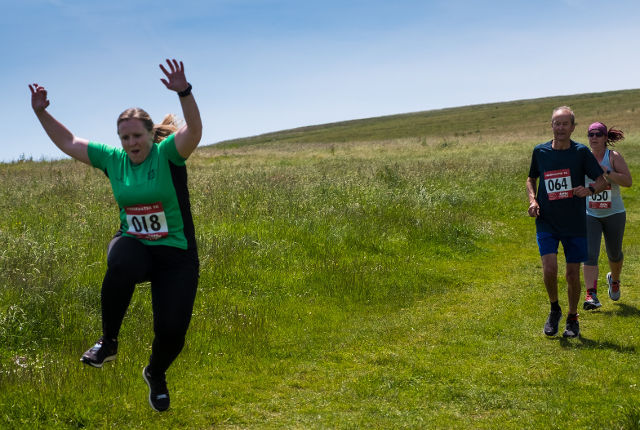 Michael shares this report from last weekend’s Festival of Running.
Well done to everyone who took part. Ed

Gary Marshall, 38, of Wootton Bridge Runners, was first Island athlete home in this years gruelling Needles Half Marathon on 1 June.

The two were neck and neck throughout, with Luke pulling away to finish in one hour, 22 min 51 sec.

Tough but enjoyable
Luke, in his fourth half marathon, described the race as,

“Tough but enjoyable. It really helped to run with Gary, because he knew the route and set a very fast pace. He was brilliant.”

“I had a nice, steady-paced race. I took a tumble in a field, but didn’t come to any harm. I ran a strong race, but Luke had a stronger finish.”

Gary was cheered at the finish by his family, including daughters  Rosie, eight, and Megan, six, who had taken part in the Junior Fun Run.

With 434 entries, the race marked the climax of the third IW Festival of Running, organised by West Wight Sports and Community Centre.

Winner of the 5km was Ross Wilkes, of IW Road Runners, in 17min 57sec. First woman was Nicky Millard, of Warley Woods Pacers, in 24min 39 sec.

“The festival was a huge success, thanks to our magnificent runners, sponsors, marshalls and staff. We really couldn’t do it without such a brilliant team.”