The delivery of the new train, making its way down from Warwickshire, marks a major step towards a more modern Island Line 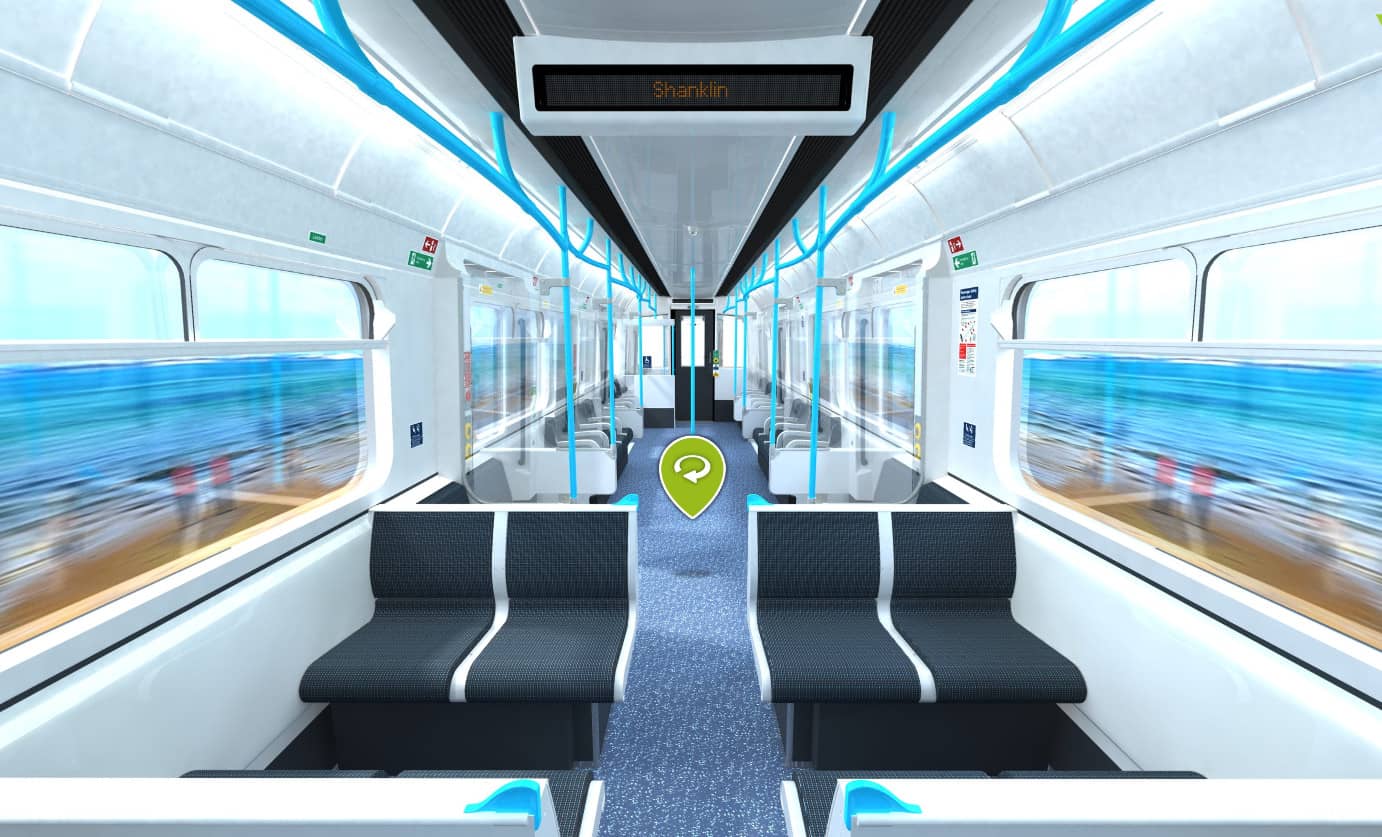 The first of the fully refurbished, high specification fleet arrives today (Thursday), marking a significant milestone in the delivery of a modern railway for the Isle of Wight

This afternoon, amidst the usual mix of passengers making their way over to the Isle of Wight, the 14:45 ferry pulled into Fishbourne Ferry Port carrying a rather different kind of passenger.

Whilst cars, vans and lorries are very often seen boarding, it is rather rarer to see a train, on a lorry, on a ferry.

A major step towards a modern Island Line
With a major upgrade to Island Line underway, however, the arrival of the first of the new fleet of trains has been highly anticipated in advance of their entry into service in spring 2021.

The delivery, which marks a major step towards a modern Island Line, has been in the works since September 2019, following the announcement of £26m of funding primarily from the Department for Transport (£25 million), with support from Isle of Wight Council (£300,000) and Solent Local Enterprise Partnership (LEP) (£700,000).

Upgrades and enhancements
Whilst the outside of the trains may look familiar – although in a different colour scheme – the inside will tell a different story, with a whole host of upgrades, new interiors and enhancements to the customer experience. The complete makeover also includes adding free on-board WiFi, significantly improving onboard passenger information, and providing charging sockets and wheelchair spaces.

Class 484s
The newly refurbished train will operate alongside four others in the fleet, due to arrive on the Island over the coming months. These trains, known as Class 484s, continue Island Line’s long-standing tradition of using refurbished and transformed former London Underground rolling stock.

They will replace the existing 82-year old Class 483 fleet, which were originally built in 1938 for the London Underground, and have served Island Line since the late 1980s.

Former District Line trains
The new trains – which previously served London’s District Line, delivering customers to popular events and locations such as the tennis at Wimbledon and the museums in Kensington, not to mention the heart of the City – are being built by English rolling stock manufacturer, Vivarail, based in Long Marston in Warwickshire.

For those hoping for a sneak peak of what it will feel like inside the new trains, Vivarail have created a virtual tour of the train interior which can be viewed here

Improved infrastructure
Alongside the modern fleet, Island Line will soon benefit from a number of infrastructure and station improvements including: the installation of a new passing loop at Brading, allowing for a service at regular 30-minute intervals; track enhancement work to improve ride quality; and adjustments to platform heights to improve accessibility.

In order to complete these improvement works, Island Line will be closed from 4th January 2021 until 31st March 2021, with replacement buses operating instead. Following these works, the new trains will be introduced into service.

For more information on the improvements we’re making to Island Line, head over to the Website.

“Island Line customers are going to notice a real improvement with the introduction of this new fleet, improving journeys for the future.

“The Class 483s have proven to be the workhorse of the railway, but these newer trains will help modernise the rail experience on the Isle of Wight for years to come.

“This is the first major step towards a better railway for the Island, and we are now only a matter of months away before the trains enter service.”

“It’s great to finally see this long-awaited, welcome improvement, that will bring the Island Line into the modern era.

“Passengers on the Island Line will benefit from the new fleet’s more comfortable and reliable services, whilst still being able to enjoy the unique charm that has become a hallmark of the Island’s railway.”

“The arrival of the first of the new trains is a major milestone in our work with South Western Railway to improve connectivity on the Island.

“We now need to ensure that local communities can get the best possible use of this new fleet, with a regular service aligned with other transport options, and I am delighted to be able to confirm the LEP’s £700,000 Local Growth Deal investment into the Island Line to make this possible.

“This will ensure that the service is sustainable and can operate for the benefit of Island commuters for years to come.”

Seely: An important milestone
Bob Seely, Member of Parliament for the Isle of Wight, said:

“I am delighted to welcome the first of these trains to the Island. This is good news for residents, commuters, students and the tourism industry who can now look forward to a much better passenger experience from next May onwards.

“Today marks an important milestone in the overall improvement of rail provision and connectivity from Shanklin all the way through to the mainland. We will see half-hourly trains throughout the day, starting earlier and finishing later to provide a more comprehensive service.

“Along with the Isle of Wight Council, the Solent LEP, KILF and various other interest groups, we convinced the Government to back this multi-million pound investment in Island Line, which – together with the forthcoming work to Ryde Railway Pier – amounts to the biggest upgrade the route has seen in over 50 years. I am also grateful to South Western Railway who have remained committed to delivering these improvements, despite the significant difficulties of recent months.

“Like many Islanders, I look forward to travelling on the trains once they are fully operational.”

“We welcome this investment in Island Line by South Western Railway which will usher in a new era of travel on this important railway line.

“This is in stark contrast to the current trains being used on the Isle of Wight which are older than some of the trains running on the heritage steam railway.

“We look forward to seeing the Class 484 trains in action next year, together with a new passing loop at Brading which will enable Island Line to run a service at regular 30-minute intervals, providing better connections to ferries to the mainland.”

“The Class 484s are an excellent addition to our suite of emission-free trains and we are delighted that they are heading to Island Line.

“The air on the Isle of Wight seems to suit trains so perhaps these will continue the venerable tradition of the Class 483s and keep passengers and tourists moving for decades to come.”

Lovely to have shiny new trains, but they only serve a very small part of the island. Instead of making pointless changes to St Mary’s roundabout, it would have been better to bring back the Ryde-Newport and Newport-Cowes lines, which would surely ease some of the congestion on our roads.

Looks lovely….. just like Floating Bridge 6 did when it arrived!

Seriously? Can’t there be any good news without someone having a sideways dig?

So you think Floating Bridge 6 is a success…?

Great news amongst all the COVID gloom. The Second car of this two car train came over on the ferry this evening. The rest of the trains will follow over the coming months into 2021.