Several weeks ago we were contacted by a concerned local resident, John McIntosh, wishing to provide some information for publication on the blog.
Rather than re-write what he’s told us into an editorial piece, I thought it better to simply publish his words (and photo – …

Several weeks ago we were contacted by a concerned local resident, John McIntosh, wishing to provide some information for publication on the blog. 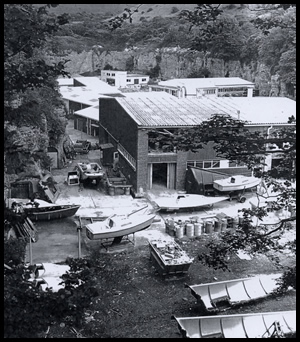 Rather than re-write what he’s told us into an editorial piece, I thought it better to simply publish his words (and photo – left) in the manner that they arrived. Here it follows.

I thought you might be interested to see the attached picture of my boatyard (Copland Boats) which was at the old railway station Industrial Estate, up until 1985, when we moved to Cowes.

It gives some idea as to what a fully operational boatyard can look like. Messy, to say the least. Not the kind of sight one wants to see next to a pleasure beach or paddling pool.

I’ve heard that one of the Councillors who is supporting the development has stated that Cheetah Marine can do for Ventnor what Sunseeker has done for Poole. He neglects to say that Sunseeker operates from a waterside Industrial Area far away from the public amenities.

I fully support Cheetah Marine expanding their business, provided they do so at an established industrial area. If they want easy access to water then I suggest they move to Cowes.

Our fitting out operation used to fill a 4 yd waste skip every two or three weeks.

The main problem associated with fitting out reinforced plastic boats is the generation of dust. Reinforced plastic laminates that are trimmed, cut, sanded or drilled, produce toxic dust. I made reference in my objection to the planning application to the Health & Safety Executive legislation that is applicable to this type of work.

One can just imagine mothers getting their children back home, after a day spent by the paddling pool, only to have the children complain that they itch all over as a result of the dust.

If Cheetah Marine is allowed to build their factory on the Esplanade then I foresee a situation where as they continue to grow they will need more Workshops. Will they also be able to build these on the Esplanade? Or will they then have to move their operation to Cowes, leaving behind workshops that get knocked down to be replaced by housing.

My personal view is that it is in Cheetah Marine’s long term interests to move to Cowes now. They would be nearer their material and equipment supply sources, ancillary marine trades, skilled workforce, the ferries and their potential customers.

Dust – I think this along with the smell and noise could be a major problem. There appears to be nothing in the plans, for the new building, to restrict or contain these hazards. I would imagine if the Health & Safety Executive have looked at the planning application there will be some conditions placed on the working methods. If not, I think we should ask the question as to why there are no restrictions.

When we moved Copland Boats to Cowes all our staff went with us. In fact quite a few of them lived in Newport and Cowes and they welcomed the move.

Incidentally, I started Copland Boats in Ventnor in 1967 and we moved to Cowes in 1985, where I went into partnership with Michael Souter.

I have included some photos of the current Cheetah Marine skips up on the industrial estate, as John didn’t have any of his whilst he was working up there. Just gives you an idea of the amount of mess than can be created by boatbuilders.

There’s something missing from these photos – the workers in white overalls wearing masks. Not what I would call a great potential ‘tourist attraction’

Vote Up00Vote Down
oldie
It’s actually horrifying. This is the most important visual information that could ever be seen. It will once and for all time put an end to ventnor seafront as a tourist attraction. It is also very very sad as the people in County Hall with the power who are not involved or even interested in the tourist trade, because they will get their salaries anyway, will already… Read more »
Vote Up00Vote Down
greenman

so no doubt the pool if it ever re opens will prove a hazard to kids and have to be shut … lah Ventnor is not going to be the great safe place it once was…..

I think its a disgrace that such an eye sore is being built on our sea front and I wonder what effect it will have on local businesses which rely on tourism to make a living.
not to mention the fact that it could drive people away from their homes due to pollution

Just to put the pollution comment into perspective I think it will be hard for Cheetah to produce more pollution to drive people away from their homes than the awful stench that can come from the rotting seaweed in the Haven right next to it.