Chris Jarman details how he’s giving over part of his garden to allotments for others.

Ventnorians who have been on the allotment waiting list for some time will be very jealous when they hear of what’s on offer to Freshwater/Totland residents. 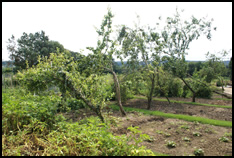 Chris and Hilary Jarman, the owners of Freshwater Court have recently opened up their land for community cottage garden plots and talked to us about how the land has been transformed and what hopes they have for it.

As we wandered through the rose gardens, we spot some of fabulous Alice in Wonderland carvings, created in the stumps of dead trees by local wood carver Paul Sivell.

As Chris and Simon walk through the plots, Chris starts by telling us how overgrown the land was when he and his family arrived four years ago.

The mass of bramble and dead wood had to be tackled with machetes, chainsaws and lots of elbow grease. They now have huge stocks of firewood which would be able to service the local community for years to come. 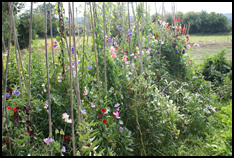 Once the clearance was completed, Chris found they were left with several acres of land, part of which were originally the cottage gardens that serviced the house, when the previous owners had seven full time gardeners!

The Jarmans recognised that there was a huge need in the local community for allotment plots and decided to make some space available.

As Simon points out during the interview, this is a very generous act by The Jarmans as they are effectively giving up part of their garden for the community, but as Chris points out, they do have plenty of land, with lots of different uses. There are paddocks, orchards, a huge field for the Boys Brigade camps, rose gardens, but they felt it was a convenient place for people get to and feel it works well.

Each plot is made up of 9 foot bays with grass sections in between. Some who have taken up the cottage garden plots are more mature, but with a passion for growing produce and flowers. Others are complete novices who are learning the ropes from those with more experience. 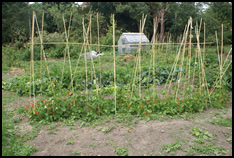 Saving Rare Fruit Trees
Some who have plots are lucky enough to have rare fruit trees which were discovered under the brambles. Chris explains that they have nic’d the bark on some of the trees, which in turn has sent out new shoots. In the winter, these will be removed and grafted onto new root stock to create clones of very old variety fruit trees.

There are many plans for the community gardens, listen to the interview to hear more. It’s all inspiring stuff.

Perhaps a landowner in Ventnor might follow suit and offer some of their land for this wonderful community led initiative.