Shouting, “The police are storming the RedJet – Fully tooled up!”, got everyone’s attention at a company overlooking Southampton Quay. The dramatic photos show why the training exercise caused such excitement. 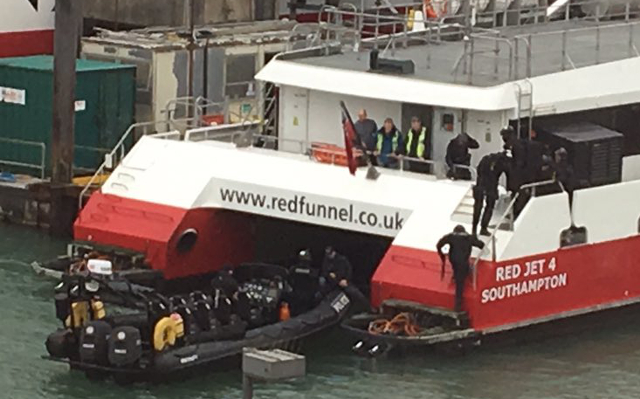 A police operation in Town Quay, Southampton caused a stir this afternoon.

Staff working at Etch – which overlooks the Quay – were shocked to see police officers ‘storm onboard’ RedJet4, whilst it was moored up, out of service, in the harbour.

Great excitement
Technical Manager, Phil Dye, was working in the Etch boardroom when he spotted the police action. He called out to the rest of the office that police were storming the RedJet. Not surprisingly they quickly joined him in the boardroom to watch the action.

‘Tooled up’
Etch Managing Director, Tom Frame, told OnTheWight there were around eight officers, armed with what looked like semi-automatic machine guns.

Red Funnel and Hampshire Constabulary have since confirmed to OnTheWight that it was just an exercise.