Show your support for Independent Lifeboats 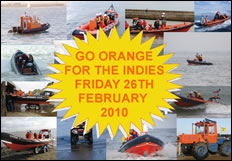 What’s it all about?
‘Go Orange for the Indies’ takes place on Friday 26th February, when we’ll all be urged to join the Independent lifeboat units by wearing something orange or holding an “orange” fundraising event.

The independent lifeboat stations play a really crucial role on the Island, reminding us that the RNLI is “not the only charity that save lives at sea”.

Fully trained and ready to launch
Those operating the independent lifeboats have received all trained to the same high standard as the RNLI and their rescue craft adheres to the same strict code as the RNLI.

Your Indie needs your support
Of course, Independents will never be as large as the RNLI, but the services that they provide are just as important.

As with so many things in life, costs rise every year and now more than ever the independents need the support of their local communities.

We’re all being urged to think about how we can help raise much needed cash for the Independent lifeboat stations. Perhaps you can get together with friends or colleagues and do something wacky to raise awareness as well as money?

If you can organise a special ‘Go Orange’ event, please get in touch with Michaela White 812178

This is great. I’ll be wearing orange and encouraging everyone I know to support this event. We are so lucky to have the indies on the island, they are a massive asset.