Thanks to Deborah Percy for sharing this great news of her son, Nick Percy’s achievement. Well done Nick! Ed 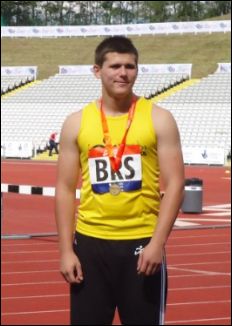 Nick Percy Won Gold at The UK School Games on Saturday , smashing the discus championship record by over three metres.

He competed against top athletes from all over England, Wales, Scotland and Northern Ireland and produced a whopping throw of 57.20 metres to clinch the gold.

He will now travel to compete in the Commonwealth Youth Games on Isle Of Man in discus and hammer … so ‘big up’ the support for your local lad.