Have your say on future Wight Coast Trail

A consultation on whether to include the Isle of Wight as part of the Marine and Coastal Path Act 2009 has been launched. Residents urged to take part to help attract funding and special status to the coast path.

Following the last update back in July, thanks to David for sharing this news with readers. In his own words. Ed 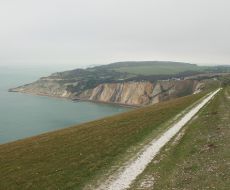 The Government has announced in the House of Lords that it intends having a consultation about the future Wight Coast Trail.

The consultation will finish on Friday 16th November. Residents and members of the IW Ramblers are urged to use this opportunity to forward their views to DEFRA.

There are two questions: the first is “Should the Isle of Wight be included?”; the second is “Should it receive priority?”

Long running campaign
The IW Ramblers has been campaigning for a truly coastal path, as part of the Marine and Coastal Path Act 2009, which includes the provision of an English Coastal Path.

Plans have been rolled out to complete a large part of the National Trail by 2017. Islands are not automatically included and we have submitted a case for the Isle of Wight.

We are urging the government to provide a trail around our Island within the next three years. This would be not only a big boost to the tourist economy but also a unique opportunity for landowners to increase business opportunities by providing the facilities that will be needed to service an increase in the number of visitors.

This will include the provision of new cycle routes and long distance paths with all IT support needed by tourists. The new paths should be available in 2014.

This should make the Island one of the best tourist locations for walkers and cyclists. The provision of a Wight Coast Trail would be the jewel in the crown of this project.

You can find details of our campaign on our website

Image: Bortescristian under CC BY 2.0