Officers are recommending conditional permission for the three-storey course which will be built between the boating lake and the bowls club in Sandown and claims to be the only one on the Island. 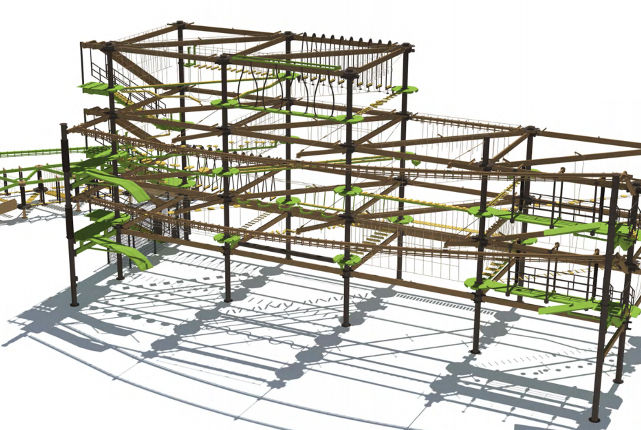 A high ropes adventure course looks set to be given approval by the Isle of Wight Council.

The sky trail in Sandham Gardens, Sandown, will reach up to 13 metres in height, with a scaled down version reaching up to 3m for children under seven.

The three-storey course will be built between the boating lake and the bowls club and claims to be the only one on the Island — and one of just a handful to be built in Britain.

Designed to blend in to the surroundings, the frame and fencing will be brown and green.

Similar courses have attracted over 10,000 customers in four months.

“Although the attraction is designed to have maximum impact in terms of attracting people to Sandown, we do not believe the Sky Trail frame will have a harmful effect on the site nor on surrounding designated sites of historical or ecological importance.”

Open in March 2019 if approved
If the application is approved at next Tuesday’s planning committee, an order will be placed for the frame with the American-based owners and manufacturers of the Sky Trail High Ropes System.

From order, the frame will take three months to be built in Michigan, and then one month to be shipped to the Island.

Following safety inspections, the attraction would open in March 2019.

That looks good on the video. Could be a decent idea.