RNLI rescue figures reveal a busy 2015 for Hampshire and Isle of Wight volunteer lifeboat crews. Well done to you all, putting your lives at risk to save others in distress. 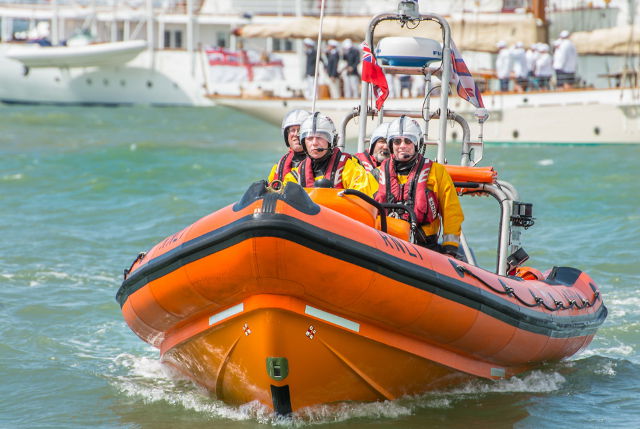 This in from Richard on behalf of Yarmouth RNLI. Ed

Royal National Lifeboat Institution (RNLI) lifeboat crews around the coast of Hampshire and the Isle of Wight were kept busy in 2015, according to figures released by the charity this week.

Collectively, crew from the seven lifeboat stations in the area launched 392 times last year to attend a wide range of incidents including commercial vessels in trouble, adrift fishermen, struggling swimmers and leisure boaters in difficulty.

Saving lives
Overall RNLI lifeboat volunteers in Hampshire and the Isle of Wight rescued 487 people. Of those, eight were classed as lives saved – a specific RNLI criteria where a person would have died if not for the RNLI lifeboat arriving on scene.

The busiest lifeboat station in the area was Calshot with its crew launching 88 times, rescuing 101 people and saving three lives.

“Once again our volunteer lifeboat crews have had a busy 12 months working hard to serve their local communities. They willingly down tools and drop everything to respond to an emergency call for help day or night, come rain or shine.

“Over the past year the RNLI has also been working hard to prevent people from getting into danger, whether that is through lifejacket clinics or our Respect the Water campaign. We understand that things can go wrong from time, so some preventative maintenance and annual checks prior to the boating season should allow for worry free sea time.

“I would like to thank all of our volunteers for their tireless hard work and dedication throughout the past 12 months. Without all of our supporters, fundraisers, crews and education teams our lifesaving service would not operate.”

Notable rescues around the coast of Hampshire and Isle of Wight included: