How to get involved in the Wyatt and Jack Inflatable Amnesty

Always innovating, this great little Isle of Wight business launches their latest idea in the constant battle of how to avoid sending unwanted plastic to landfill. 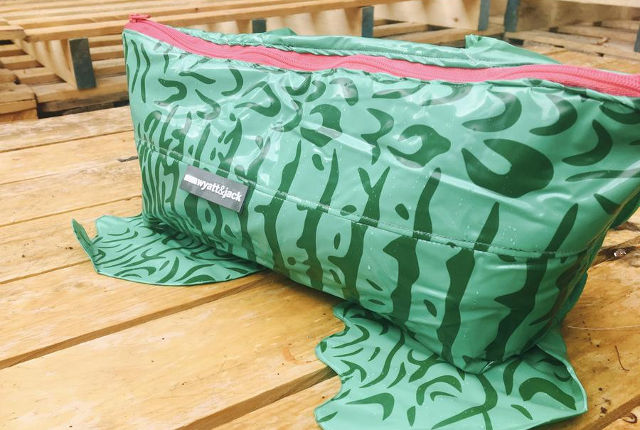 One of our all-time favourite Isle of Wight small businesses, Wyatt & Jack, has just launched another way that you can help in the battle of what to do with plastic waste. them into adorable bags of all shapes and sizes – thereby ensuring the unwanted plastic does not end up in landfill!

Before anyone gets up in arms about the phrase Inflatable Amnesty (it’s happened), we should point out that it’s meant to be tongue in cheek, a play on words, if you will.

“People leave their old windbreaks, trampolines, rubber dinghies and all sorts of other beach paraphernalia, outside our workshop all the time!

“After this year’s disastrous attempt at having our own paddling pool in the garden (our cat pierced the sides of it, within two weeks!) it reminded me of an idea I had a couple of years ago, but haven’t had a chance to put into practice.”

Lovell: “Send it our way and we’ll turn it into bags”
Georgia goes on to explain,

“The Wyatt & Jack Inflatable Amnesty is based on the same idea, that lots of beach-goers would be ending up throwing quite a few broken inflatables and water toys into bins either before the end of their holidays, or on their way home.

“So this year, if you have an inflatable that has a puncture that you can’t repair, or is intended for the bin – send it our way and we will turn it into bags!” The great thing with Wyatt & Jack’s Inflatable Amnesty is that you can also follow the journey of your unwanted item, to beginning its new life as a bag! Follow the movement on Twitter and Instagram by looking our for the #inflatableamnesty hashtag.

If you have a coastal business, cafe, beach shop and you would like to get involved in collecting up items, please email the team at hello@wyattandjack.com

What they become
See the entire collection of upcycled bouncy castle and deckchair canvas bags on the marvellous Wyatt & Jack Website.