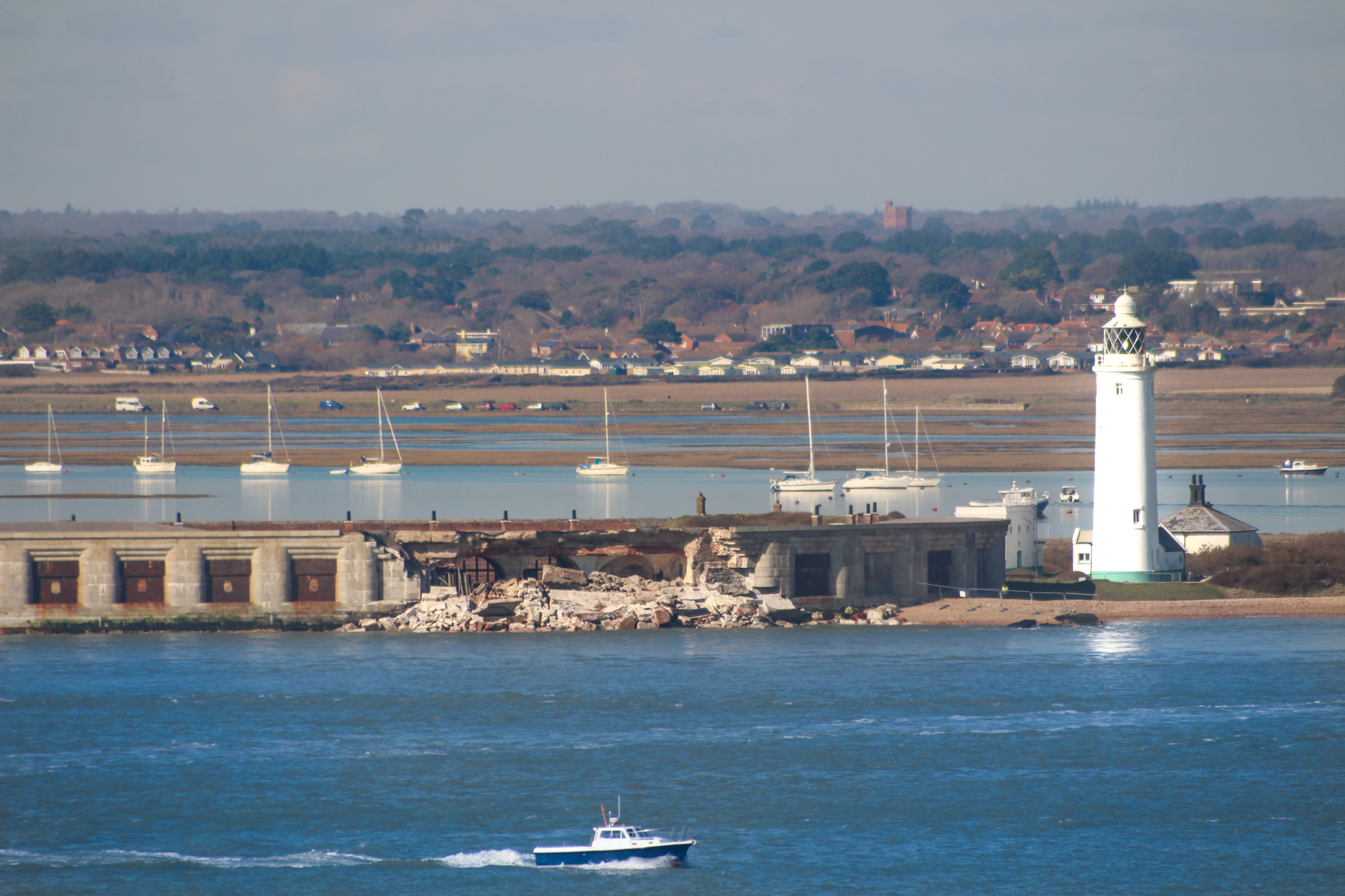 A section of the wall on the 19th-century east wing of Hurst Castle in Hampshire collapsed on Friday afternoon (26th Feb), after the sea exposed and undercut its foundations (See main photo, above, by Richard Cattle).

The castle was closed to the public, the staff was evacuated and thankfully, there were no injuries.

Staff from English Heritage’s engineering team were on site when the incident occurred and they are now inspecting the damaged area and identifying the immediate works necessary to stabilise the surrounding masonry.

“This is a devastating blow to a Hampshire icon and for all of us whose life’s work is to protect England’s historic buildings. Hurst Castle is the most challenging of our sites to protect – a coastal fort built on a shingle spit directly facing the hammering sea.

“Faced with more frequent storms and rising sea levels, Hurst Castle is emblematic of the issues posed by climate change to our heritage.”

History of the Castle
Located at the western end of the Solent, Hurst Castle in Hampshire was originally built by Henry VIII between 1541 and 1544 to guard the Needles Passage, the narrow western entrance between the Isle of Wight and the mainland.

In the 1860s two huge wings were added – on the east and west side of the central structure – as part of a programme of defence that made this part of the south coast one of the most heavily fortified in the world. In the First and Second World Wars the castle was fully garrisoned and its searchlights and guns guarded the entrance to the Solent.

With changes in longshore drift, rising sea levels and more frequent storms, Hurst Castle is amongst the most difficult heritage sites to protect in England.

£750,000 spent on stabilising sea defences
In 2019, English Heritage undertook an extensive programme of works totalling £750,000 to stabilise the foundations of the west wing of the castle and to reinforce its sea defences. The charity underpinned the west wing’s foundations, replaced broken groynes and barriers, and replenished the beach with 7,500 tonnes of shingle.

Two years earlier, in 2017, English Heritage invested £1m in a major project to repair and conserve the castle’s roof.

Days away from underpinning east wing
English Heritage was days away from commencing works to underpin the east wing of the castle, whose foundations – similar to the castle’s west wing – were being eroded by the sea.

However, there were no signs of any major structural problems until a storm on 23rd February prompted a rapid descent from stability to the collapse of an approximately 38 metre section of the east wing wall.

Most at risk from climate change
Hurst Castle is one of the country’s historic sites most at risk from climate change. Environment Agency data from nearby tidal gauges shows a net mean increase in sea levels and the Environment Agency has stated that levels will rise in the area by 1m – 1.5m in the next 100 years. The area between Hurst Spit and Lymington is the subject of a large scale multi-agency flood risk management strategy.

The evidence of existing impacts is already well documented, for example a storm in 2014 displaced 100,000 tonnes of shingle from the Hurst spit overnight, reducing the height of the spit’s ridge by 7m. As such, the coastal castle is emblematic of the huge challenge posed by climate change to our heritage.

Hurst Castle is managed on English Heritage’s behalf by Hurst Marine and its team – all of whom care for the castle deeply – have been working tirelessly under very difficult conditions.

News shared by English Heritage in their own words. Ed

I wonder if it is worth spending vast amounts of money just to delay the inevitable. Perhaps it would be better to save people’s homes rather than an ancient monument.

Vote Up1-4Vote Down
Tamara
This is NOT an ancient monument. The castle was built for Henry VIII in the sixteenth century to prevent a Spanish invasion. The huge battery wings were built one on each side of it in about 1860 to protect the naval port of Portsmouth from destruction and England from invasion by Napoleon 111, Emperor of France, as revenge for his grandfather’s capture and imprisonment. This complex has… Read more »
Vote Up60Vote Down
Tamara
If this country can waste £billions of taxpayers’ money on vanity projects like HS2, it can afford to preserve our heritage. This castle-cum-fort played a significant role in at least four important periods in history: Henry VIII’s rift with the Vatican and Spain, Charles I’s imprisonment, Palmerston’s forts built in and beside the Solent to defend Portsmouth, and the Second World War use of these forts to… Read more »
Vote Up60Vote Down