Brown’s Golf Course is not only a wonderful cultural institution, but also a hotbed of innovative local business activity. Find out more about new report and blueprint 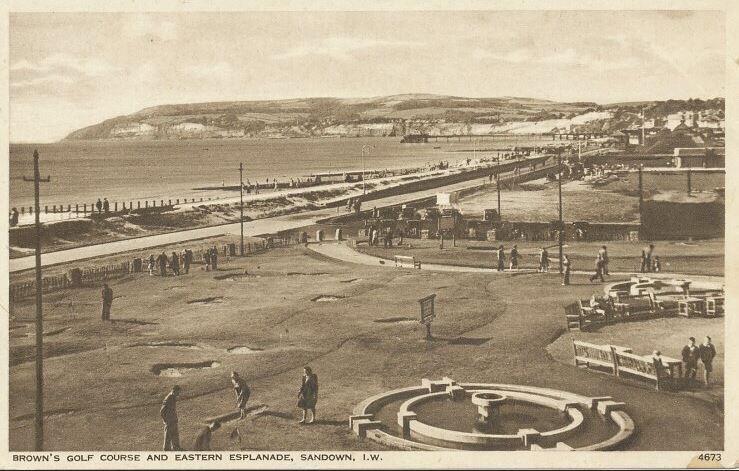 The story of one of the Island’s best-loved attractions is now available for free to anyone who wants to dip into its 80 years of fascinating history.

Ice Cream and Golf, Science and Innovation is a new report and blueprint, capturing the community, wildlife, history and holiday fun that make Brown’s Golf Course, Isle of Wight an extraordinary public place.

Sausage and Pie King
Browns Golf Course was created by Alexander Kennedy, the owner of a famous chain of London sausage and pie shops.

An astute businessman, Kennedy (known as ‘Brown’), was a regular visitor to the Island and soon recognised the commercial potential of the land at Sandown, both the boating lake and the land that was to become Brown’s golf course.

Opened in 1932
He recruited his London neighbour, celebrity professional golfer Henry Cotton, to design the first course and play the first round at the grand opening of Easter 1932.

Top secret PLUTO project
The rise of Brown’s in the years that followed, its requisitioning in 1942 by the War Office for the top secret PLUTO project that powered the D-Day landings, and its subsequent recovery, decline and rescue are all charted in a new conservation management plan commissioned by local community organization The Common Space.

The work was supported by the Coastal Revival Fund, the Isle of Wight Council and Down to the Coast, the East Wight Landscape Partnership.

Rich ecology and heritage
The report provides additional information on the rich ecology of the site and its associations with both the coastal landscape of Sandown Bay and the river valley wetlands of the Eastern Yar.

Also included is the restoration of the listed Pavilion and its adoption by the fantastic Men In Sheds and the report captures the mix of wildlife, history and holiday fun that makes Brown’s such a special place.

The Common Space
The Common Space is based at Brown’s, with its partner organizations Arc Consulting and Artecology. Together they are behind many of the Bay’s local projects, including The Lost Duver rewilding, Discovery Bay calendar of free events, the Willow Walk and The Christmas Garden, as well as supporting the Hullabaloo festival, the Boojum and Snark microbrewery and the National Poo Museum.

“It’s fantastic to be able to celebrate the importance of Brown’s to the Island. It is a wonderful cultural institution of course, but it has become a hotbed of innovative local business activity too!

“This same project is also creating a blueprint for the future, so that we can continue to build on the progress here and shape the next steps.

“We see the conservation management plan as fitting very closely with the Isle of Wight Council’s Eastern Bay Regeneration Strategy and we are working hard to bring both to life here, for the benefit of the Island and Sandown Bay.”

You can find the Brown’s report on Issuu, at The Common Space – Browns Golf Course Conservation Management Plan and you can read about the Eastern Bay Regeneration strategy too via Isle of Wight council’s regeneration Website.

News shared by Claire on behalf of The Common Space. Ed

Doughnuts?
The best place ever for doughnuts!

When Nanna Francis came down from London this was where we always went for their ice cream made nearby. I used to work there in the school holidays when it was owned by Miss Kennedy & Mrs Snowball , the daughters of the founder.

The PLUTO connection claimed for the engine house has long since been exposed as a myth. There never was any evidence for it.
https://www.iwhistory.org.uk/archive/newsapr19.htm

The engineers referred to as renovating the site don’t make the PLUTO claim, nor does the published history of Browns. This is a muddled report.

Top Secret, nein? Try your luck with Wickipedia. There were, apparently, many sites. Don’t dismiss at face value.