Young people prove themselves in the Young Chamber. 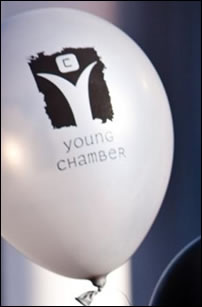 Each year the awards recognise members of the Young Chamber who have excelled in their achievements.

Amazing achievements
Hearing the extent of the challenges the young people have faced in the last year, made it clear that this awards ceremony was not a veneer of fluff, but well deserved recognition for the hard work, initiative and enterprise shown by the young people.

The evening featured updates from several of the young people on what they’d been involved with over the previous year, as well as a motivational talk by former Apprentice finalist, Saira Khan.

Attitude is everything
Giving a background to her upbringing, role models and motivation, Saira explained the process of being on The Apprentice and boiled her success down to being hugely driven.

Her message to the young people was that if you want it hard enough and have the right attitude, you can achieve anything.

Interviews to follow
VB was lucky enough to catch Hayley Toms, who picked up three awards, and Kevin Smith (Chamber Chief Executive) for interviews after the events. Those to follow later.

In the meantime, congratulations to all the young people who received awards last night, and all those who took part in the challenges.

What fantastic achievements by all the young people. They are a credit to the Island. Well done to everyone taking part.