The lucky couple were on holiday when they discovered their Lotto win, so they kept the ticket under pillow at night for safekeeping. 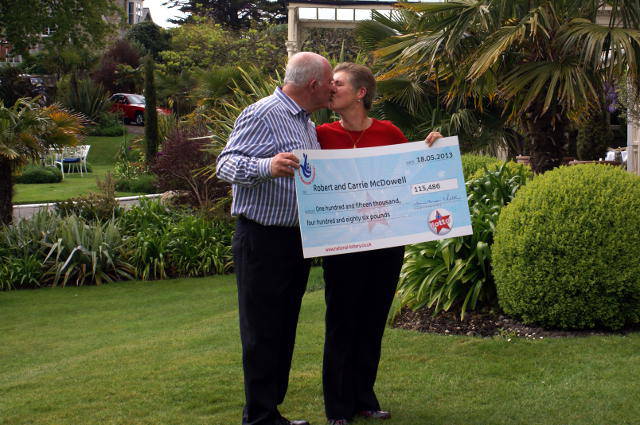 Ventnor residents, Bob and Carrie McDowell, have been playing the National Lottery since it first started almost 18 years ago.

Every week they fill out three lines for the Wednesday Saturday Lotto; Bob’s numbers; Carrie’s numbers and since 1996, Carrie’s late mother’s numbers.

Apart from a small win several years ago of £33, Bob and Carrie are every hopeful each time they fill out the ticket that this week they’ll be lucky.

So you can imagine their shock when on a Scottish road-trip a couple of weeks ago, they discovered they had matched five numbers and the bonus ball to scoop a whopping £115,486.

Lucky ticket
At the official presentation of the cheque today, Bob explained the moment of dicsovery,

“We were both pretty tired when we settled down in front of the telly. When the draw show came on we decided to check the tickets we had bought in Ventnor on the Wednesday when we left the Isle of Wight to head north.

As the numbers came up I said to Carrie, ‘You won’t believe this, we’ve got all five, that’s got to be about £2,000.’ Carrie was over the moon and said, ‘That’ll do me nicely’. It was only when the bonus ball came up and we matched that too our jaws dropped to the floor.

We just couldn’t believe our numbers had come up!”

They immediately put a call into Camelot to confirm the win, then once that was done, Bob celebrated with a few bottles of lager and tea-total Carrie a lemonade.

Bittersweet win
They decided to continue with their Scottish adventure, taking their beloved 23 year old MX-5 to a Club Meet on the Sunday before taking in a few of the country’s finest distilleries and enjoying the balmy weather.

“The win is slightly bittersweet because we inherited the winning numbers because Carrie’s mum passed away. Obviously we would rather have her here but we like to think that she is smiling down on us as we come to terms with this wonderful news.

We have worked hard all our lives and saved for retirement so the wolves were not quite at the door but like many people, we have had to be careful with our money, being mindful every time we turn up the heating or decide to take the ferry over to the mainland for an MX-5 Club meeting or to see friends. This win has changed all that. Feeling financially secure is the most amazing feeling.”

Remaining grounded
Although it’s still sinking in, Bob and Carrie seem to have their feet on the ground and plan to invest most of their winnings to give them security in retirement.

Carrie has picked out some new curtains and bought a camera, and Bob treated himself to a new TV.

Strong love for the Island
The couple visited the Island for many years as tourists before moving to Ventnor ten years ago.

Before retirement, Bob was a delivery driver for Philips Fine Foods. He and Carrie are active volunteers with the Green Gym, helping the Island’s countryside through conservation work.

They also help manage local nature reserves once a month as Wildlife Warriors.

All at OnTheWight wish Bob and Carrie well and congratulation them on their very lucky win!

Don’t know them, but best of luck to them!