The MP said that companies like GKN Aerospace help the Isle of Wight raise its profile on the international stage. 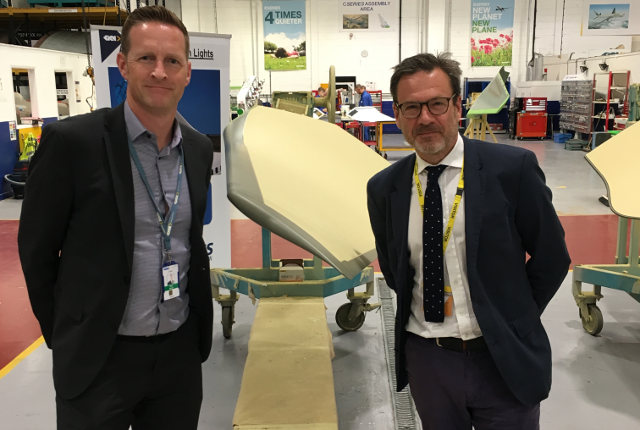 Isle of Wight MP Bob Seely has praised a decision by GKN Aerospace to invest heavily in its Isle of Wight operation during a recent visit to the company’s Cowes plant.

GKN Aerospace is investing millions of pounds in a five-year plan to modernise its Island operation by transforming the factory and updating the East Cowes site. The plans are to improve the efficiency of manufacturing processes and enhance the site’s position as a “Centre of Excellence” for advanced composite structures.

“We were delighted to welcome Bob to our facility in East Cowes to discuss our world leading products and our plans to secure the site’s long-term future, so GKN Aerospace will continue to underpin the Island’s economy and employment for years to come.

“The East Cowes site has been a fixture on the Isle of Wight for a century and owned by GKN Aerospace for the past 25 years. The new £11m investment we announced earlier this year, alongside additional capital investment over the next five years, is to ensure the site is fit for the future and keeps the Isle of Wight at the forefront of advanced aerospace systems.”

“I want to see GKN Aerospace thrive. With direct links from Portsmouth and Southampton Universities it’s important that we focus on attracting high quality jobs, and train and educate Islanders. GKN Aerospace offers fantastic apprenticeships.  I am proud that we have a cluster of aerospace, marine, composites and renewable energy firms here; however, we as an Island need to sell ourselves nationally to attract more firms in these supply chains.

“Truly global companies like GKN Aerospace help the Island raise its profile on the international stage. I am delighted to see the company is not only committed to the Island but also investing so heavily to modernise its East Cowes site and keep it at the forefront of its business.”

Meeting with minister
Bob intends to hold a meeting with newly appointed Minister, Nadhim Zahawi, Parliamentary Under Secretary of State at the Department for Business, Energy and Industrial Strategy to discuss future government plans for GKN Aerospace and proposes a further visit with the Minister to the site soon.

Above article from the office of Isle of Wight Conservative MP, Robert Seely, in their own words. Ed

I have worked in aerospace for over 40 years now and travelled all over the world with Airbus, Rolls Royce, and GKN, I would like to say that the skill base on the Isle of Wight is always outstanding, the experience confidence throughout all disciplines is of highest levels.

Not going to want to trade with Europe after 31 October then?