Isle of Wight Conservative MP Andrew Turner is of leaving the door open – in his Commons speech – for the “untested alternative that he has championed”. 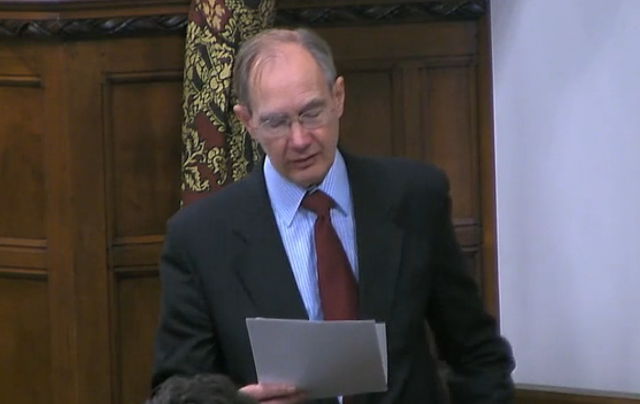 This in from the Keep Island Line in Franchise (KILF) campaign group. Ed

Whilst some important issues were aired during the Westminster Hall debate on rail services to Portsmouth and South West, KILF are disappointed that the Island’s MP did not use the occasion to unequivocally back Island Line remaining in the regional franchise for the next period.

Isle of Wight MP, Andrew Turner has – for several months – promoted a community ownership model for Island Line, including through his March 2015 letter to Rail Minister Claire Perry.

This, in turn, led the Government to announce last month that franchise bidders would be asked ‘to help sustain the line while suggesting ideas to turn it into a separate and self-sustaining business during the life of the franchise’.

Out of franchise concerns
KILF remains concerned that as long as options to remove Island Line from the security of a regional franchise remain on the table, its future is far from secure.

“After putting Island Line at risk through his relentless promotion of an unviable community model, Andrew Turner had the chance to use the platform of this debate to recover some of the damage he has caused over recent months. He chose not to do that.

“Instead he exchanged warm platitudes with the Minister about finding a ‘long-term, sustainable future’, claiming this is what the majority of Island Line passengers want. Yet if he was genuinely listening to public opinion, he would know that users want the service improved within a regional operation.

“By choosing not to advocate Island Line’s secure, long-term future in the South Western rail franchise, he wasted this opportunity, instead leaving our service to continue being singled out for a different approach to the rest of the country.”

“It was good to hear our MP say that Island Line staff are hard-working and deserve better; yet he has allowed his Transport Adviser to commission a report suggesting the use of volunteers on the service. This is just one example of how his contribution to the Westminster Hall debate was full of contradictions with his previous actions that have put the service at risk.

“It was heartening to hear Conservative MPs from across Hampshire make the case for long term improvements within the franchise model. Yet it is notable that the Island’s representative felt unable to do the same; instead leaving the door open for the untested alternative that he has championed.”

Hand delivered letter with concerns
Chris Quirk also attended the debate and took the opportunity to personally give Rail Minister Claire Perry a copy of KILF’s recent letter to her setting out our concerns. Chris said:

“The Minister promised to read the letter and I hope that she and the DfT will take note of its content when preparing the upcoming consultation process.

“It is essential that the Government gives the Isle of Wight the opportunity to make the case for Island Line remaining in the franchise for the entire next duration, and to secure improvements through this model. We have asked for the consultation to allow for that.”

Consultation imminent
The Minister told the Westminster Hall debate that the consultation on the franchise will start before Christmas. KILF will be encouraging Islanders to fully contribute to this process, along with the review being undertaken by the Isle of Wight Council’s appointee, Christopher Garnett, which will result in the Garnett Report.

Another wasted opportunity, so soon after the opportunity wasted with only tiger talk?

Vote Up00Vote Down
Rod Manley
It’s all well and good knocking Turner Mr Blackmore, he did raise the issues of connectivity as others did. This may be belated in its appeal to Claire Perry to consider the difficulties of the island. But where is Kilf’s opposition? The new “Taskforce Mark 2” is has been the only “alternative” (put out by Bacon) centred around “inadequate rolling stock, first presented by Finney and co.,… Read more »
Vote Up00Vote Down
Stewart Blackmore
Mr Manley, KILF’s position is crystal clear and has been iterated here and in other media outlets since its formation. It’s really quite simple, KILF requires that Island Line is retained within the new South West Franchise, whichever company is successful in securing the franchise. As I have said to you before – you only have to visit the KILF Facebook page and you will see our… Read more »
Vote Up00Vote Down
Richard

Rod
Mr Pugh and Blackman are making sure issues which our MP and sidekicks wish to remain secret ( why else would they not answer anyone’s questions? ) are being brought to the public’s attention, I for one am grateful.

I am too and I have been following it but I want it stay in the franchise like everyone else for the full term or nationalise it. Stewart, you are not giving your opinion on Garnet or showing any leadership to take this forward are you? Are you leaving it all to Pugh? I think you need to start a petition to Government for the full franchise.

Vote Up00Vote Down
Thomas the Tank

At least Pugh is now putting his name to this mischief and it certainly is getting him noticed by the conservative party, not in a positive way of course. Why were you there David, can we assume to represent your paymasters Wightlink?

Vote Up00Vote Down
castlewez
It seems Mr Tank is linked to the Tory Party (perhaps through his fiancee’s employer), this must be why he apparently knows Mr Pugh’s efforts are being noticed on high. Hopefully the echelons of the Tories are also noticing how unpopular Mr Turner’s plans for Island Line are, including amongst Tory voters. If they don’t know yet I’m sure the consultation responses will get this across to… Read more »
Vote Up00Vote Down
Tobytram

Vote Up00Vote Down
simple solution
There is a fairly simple solution to all this. KILF want it kept within franchise. Turner appears to have wanted to play hero in the election by coming up with a plan to ‘save’ the line. Finney seems incompetent. Dennett hasnt said a lot, but is clearly running things behind the scenes as usual. The line itself doesn’t make money because the rolling stock is too old… Read more »
Vote Up00Vote Down
skippy

Am I being stupid or is there no point about brining up connections unless we have a railway fit for purpose and we know who is running it. I’m shaking my head in dis belief!

Yes maybe a little bit Skippy, the rolling stock and track is not the issue. It should be kept in the franchise and the train has to be kept running. Otherwise you are falling back on Turner’s ground like Bacon hasand set up another Taskforce.

Vote Up00Vote Down
Certa Cito
SS in theory your idea is good but if you take a look at stations throughout the country that has barriers you will see that all require to be manned. This is due to barriers malfunctioning, tickets not operating barriers and passengers that require assistance. So any additional revenue acquired through this idea would surely be lost in additional staffing costs? I am no expert but this… Read more »
Vote Up00Vote Down
neilpalmer400

Exactly. Gating Island Line stations is a non-starter for the reasons you suggest.

And as I believe Lee (or Richard) stated, there’s nothing inherently wrong with the rolling stock preventing them moving between carriages to collect fares, as they did for years, it was just that the Health & Safety Naz, er, police, stuck their noses in where they weren’t wanted and banned it.

No wonder Mr Nicholas Finney OBE, gives free advice to Mr Andrew Turner MP. Not even the idiosyncratic Mr Turner would offer to pay for hog wash! This machiavellian purveyor of spin, hype, smoke and mirrors seems most adept at cloak and dagger concepts. He would come last on Mastermind as he would ‘pass’ on all the questions!