Island man calls for reform of the Quality and Outcome Framework to ensure that GPs do more to tackle obesity than just tick boxes. 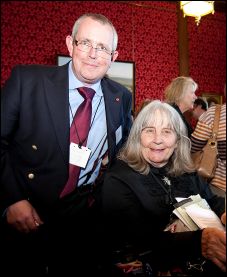 West Wight resident, Chris Whitehouse, organised a Parliamentary Reception at which the National Obesity Forum told MPs and Lords that GPs are rewarded financially for recording the number of obese patients – yet, ironically, not for doing anything about it.

So, while individual surgeries were pioneering “best practice”, they have no incentive to do more than tick boxes.

Obesity affects one in four Britons, and is forecast to cost the UK £50bn by 2050, through prescriptions, appointments, hospital admissions, benefits and reduced productivity.

Register not enough
Dr Matt Capehorn, Clinical Director of the National Obesity Forum told the Parliamentarians at the reception, “Encouraging GPs to engage with weight management services may be difficult given other pressures on their time. However, incentivising GPs to focus attention on obesity is achievable through the existing Quality and Outcome Framework (QOF).

“At present the only QOF indicator that directly targets obesity, rewards GPs for registering the number of obese people that they see. Merely drawing up a register will not prevent a single overweight person from developing type-2 diabetes or a single obese person from having a heart attack.”

Reform the Quality and Outcome Framework
Chris Whitehouse added, “The Government’s QOF indicator rewards GPs for recording the number of obese people they see. That’s it. Just collecting figures will not help a single patient.

“That is why we are campaigning to reform the QOF to reward GPs who guide overweight and obese patients into clinically proven weight-management programmes. Because the QOF system fails to encourage and reward doctors for taking the right actions on obesity, it needs to change.”

Valuable support from Baroness Masham
He added: “I have known Baroness Masham for 30 years, and I never fail to be astounded by her determination to be an effective influence on public health policy despite being a wheelchair user herself. It was a real boost for her to turn up and give her backing to our campaign.”

Chris’ work for the National Obesity Forum is funded by the leading slimming organisation, The Cambridge Weight Plan.

I wonder if GP’s are rewarded for how many diabetics they treat? What is their incentive to get people to lose weight?

By not helping the obese,(with the exception of the advice to lose weight and the standard diet sheet handout) aren’t most of the obese eventually diagnosed diabetic?

Once a diabetic is prescribed meds and/or insulin it is usually more difficult to lose weight.
In the name of prevention….

I will pass on your details Bes.

Quite correct. GPs get oodles of points for treating diabetics… a perverse incentive applies!