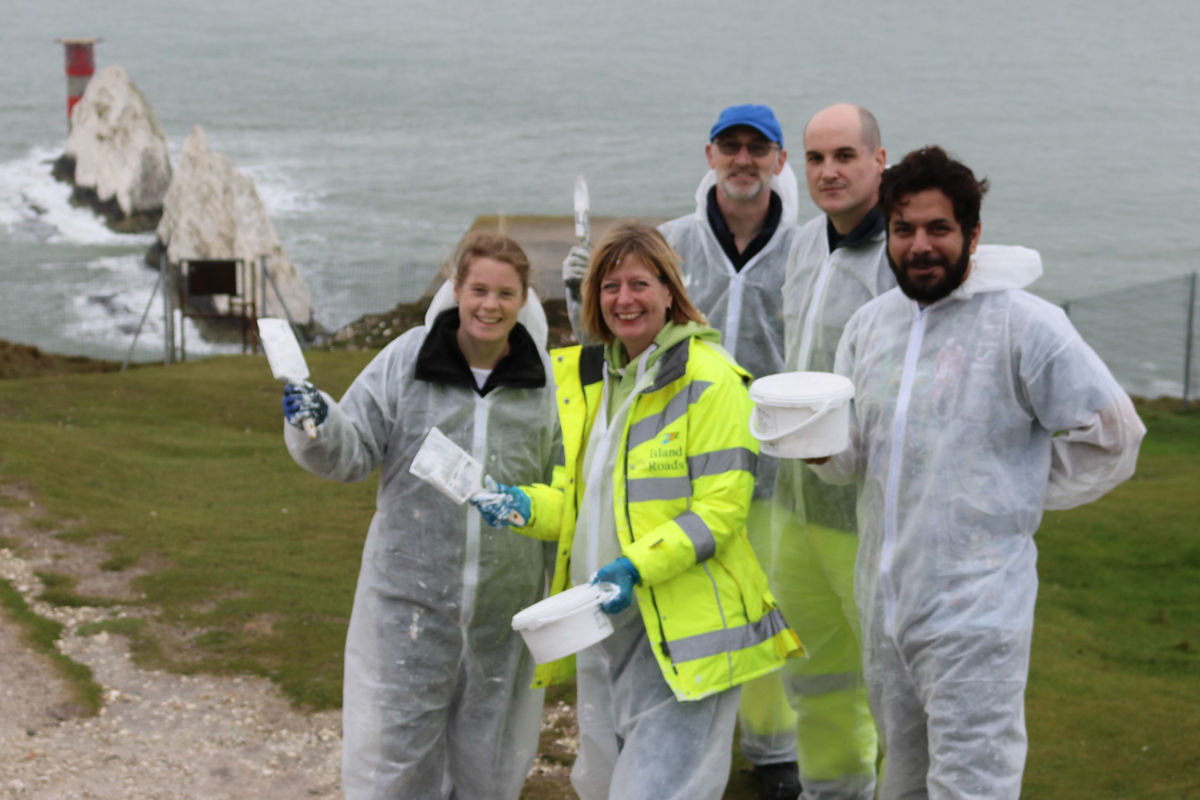 A team of Island Roads volunteers armed with paintbrushes headed to the Needles Old Battery to help the National Trust with their annual winter maintenance programme.

For the fourth year running, Island Roads staff donated their time through the company’s volunteering scheme to support the National Trust in maintaining one of the Island’s most important historic sites.

Active during both World Wars
The Needles Old Battery was built in 1862 to defend the western Solent from feared invasion by the French. This never materialised and the battery became known as one of ‘Palmerston’s Follies’, a reference to Lord Palmerston, the then Prime Minister, who ordered a major expansion of naval defences.

The battery was however active during both World Wars before acquisition by the National Trust in 1975.

The team painted the Cartridge Store, Shell Store entrance, Royal Engineers Room and Northern Position Finding Cell. They also tackled the narrow underground tunnel leading to a searchlight room overlooking the Needles and as far away as Dorset on a clear day.

“We have a long list of jobs to do to preserve the fort’s history and keep it open to the public, so the support we receive from Island Roads is really welcome.

“Thousands head to the Needles Old Battery each year to learn about its fascinating history – and enjoy the spectacular views – so it is important we keep the site in good order.

“We would like to thank Island Roads for their continued support and hard work of their volunteers who always do their tasks with enthusiasm and a smile. We hope to see them again next year when we celebrate 125 years of the National Trust!”

Thornton: Very rewarding to support organisations in our community
As part of the Island Roads volunteering scheme, the company encourages employees to take two paid days off each year to support local good causes.

“Having visited the Old Battery as a paying customer in the past it was satisfying to return as a volunteer to support part of the Island’s heritage which is loved by visitors and residents alike.

“We’re lucky to be able to donate our time through the Island Roads volunteering scheme – it’s very rewarding to support organisations in our community in need of help.”

Island Roads also assists the National Trust in more of its activities including the annual goat herding.

Find out more
More information about the Needles Old Battery and Needles New Battery can be found on their Website.

Although the Needles Old Battery is currently closed to visitors, their 1940s-themed tea-room remains open throughout the winter, Thursday to Sunday 11am to 3pm and every day from Boxing Day to 5th January.

No doubt due to more Torie cuts.