The club will take the momentum from last night’s win into Sunday when they head to Mildenhall in the the reverse fixture. 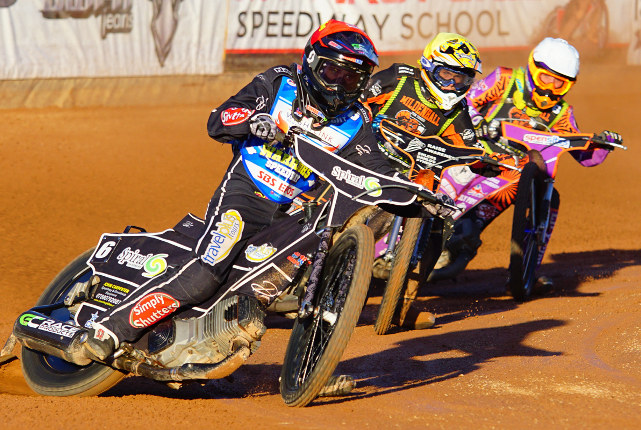 In a gripping, incident packed meeting every Warrior made a meaningful contribution to the final outcome with the reserve pair of Connor King (pictured below) and Chad Wirtzfeld showing up particularly well and making a crucial difference.

The visitors were in trouble from the first race. Warrior’s new number one Georgie Wood (pictured) was quick away from the tapes to lead the Fen Tigers talisman Danny Ayres but behind the front two Mildenhall’s Charlie Brooks took a heavy fall on bend four causing the race to be stopped.

Brooks was able to make his way off track but looked to be in some discomfort from his shoulder. He bravely carried on racing but was forced to sit out his final two outings as the soreness worsened. The Fen Tigers David Wallinger also had a night to forget with four falls in five outings.

Whilst the visitors could list a series of problems, the home side also encountered a few issues along the way with falls for Ben Morley and Danno Verge holding their scores back whilst Chris Widman has yet to cure niggling engine problems.

That said the Warriors fully deserved the win with only four last places in fifteen races and an all round team performance that saw every rider contribute a positive return at one stage or another.

If the four new Warriors were suffering from first night nerves, they certainly didn’t show it with the reserve pair of King and Wirtzfeld enjoying impressive starts. King’s ultimately unsuccessful ride to hold off Ayres showed great guts and determination whilst Wirtzfeld recorded two wins – his first wins at senior level – in a paid nine total.

Bishop: Just the start we asked for
Wightlink Warriors co-promoter, Barry Bishop, was delighted with his sides work and said,

“Well that was just the start we asked for and the boys delivered. Their team ethic was first class and they responded brilliantly to team manager Jackie Vatcher’s pre-match pep talk.

“There is so much to savour at this club right now and we will take the momentum from last night’s win into Sunday when we go to Mildenhall in the reverse fixture.

“It was also good to give our Wizards riders some track time after the main meeting and we can look forward to twenty one heats of speedway when we come back together at Smallbrook next Thursday.”