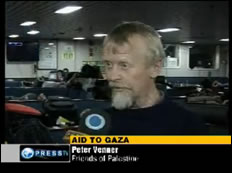 We’ve just spoken to Rachel Bridgeland, a friend of Isle of Wight resident Peter Venner who was on the flotilla heading for Gaza.

She confirmed that Peter was on-board the boat, Mavi Marmara, where it’s reported that civilians on-board have been killed by Israeli forces.

“The British Government has not been able to get any information from the Israelis about the whereabouts of the 28-32 British people on-board the flotilla – Not even who has been killed, who had been wounded, or even where they are. This is nearly 24 hours later. It’s pretty poor.”

Video on Peter on-board Mavi Marmara
Press TV carried out a report of the flotilla as it was setting off on its journey. Peter was interviewed about 35 seconds in, saying that they had, “an absolute right to do it (the aid mission).”

Our thoughts are with those who have been placed in this situation, still unaware of the fate of their loved ones on-board the flotilla.

Perhaps at last people will see the Israelis for what they are. What a turn up it would be if American Jewry finally stopped providing them with a skirt to hide behind. Maybe a hope to far.

Hope our Island representative on board has survived the ordeal OK.

I really hope he’s okay – must be so worrying for family and friends of those on board the ship waiting for news. I didn’t think when I read on VB about him helping to take aid to Gaza that it would end up as a major international incident.

Many of these aid workers put themselves at serious risk to turn our modest financial contributions into practical help. I hope Peter is OK. The US government does not seem to twig that their (and our) home security is directly linked to the hostility of these stupid and callus Israelis.

I met Peter to discuss a charitable business transaction, before I knew about his humanitarian trips to Gaza, and was struck by his genuine and caring nature.

I sincerely hope he’s unscathed, and is able to continue in his task to help the less fortunate.

If you are still buying Israeli goods then maybe it is time to reconsider. OK it may only be a small thing but, ‘little acorns…

I agree, Israeli fruit and veg is grown on land that has been taken away from the Palestinians. Palestian olive groves have been ploughed up and turned into Israels kibbuts, leaving the Palestians with very little land on which to grow food for themselves.
If you are going to boycott, Marks and Spencers have long been supporters of Israel.

It would be a nice idea for us on the Island to join with many other parts of the country and hold a peaceful vigil. Please join me at the Peace Tree on Snooks Hill at 5pm tonight.

Thanks for that video – very illuminating. Peter’s words in particular hit the nail on the head re. the psychology behind Israel’s approach. I’d only caught R4 coverage of the story up to now which has largely been John Humphries ‘interviewing’ Israeli spokespeople who appeared to have their fingers in their ears whilst going ‘la la la’.