Islander Peter Venner is still held up in the convoy to Gaza, waiting to deliver vital medical supplies to those in need.

See comments at the bottom for update to the story

Whilst we’re struggling to move around the Island due to the heavy snow and ice, do spare a thought for Islander Peter Venner who is still taking part in an international convoy, having driven thousands of miles to deliver aid for those in need in Gaza. 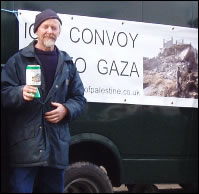 Back in November last year, Peter set off from the Island to join the Viva Palestina Convoy. The convoy is made up of 450 members of 220 trucks and ambulances and aims to deliver vital medical supplies.

Just before Christmas the convoy was forced to make a detour to Damascus after the Egyptian authorities refused to let them use Nuweiba as a gateway to Gaza via Rafa.

We’re told that the Israelis had threatened that international waters to Gaza could not be used, with reports that they’ve previously used gunboats and fired upon international aid delivering ships contrary to international laws governing use of the high seas.

There are also reports that people on the convoy have had passports taken from them.

At a time when we’re probably all very much thinking about our own situations, hearing news like this really puts things into perspective.

We hope you’ll join us in wishing Peter and others on the convoy the safest of journeys and look forward to seeing him home soon.

13 Comments on "Islander Still Held Up on Convoy (updated)"

How brave of Peter, what a noble act. Best wishes to everyone involved in the convoy.

I agree Angie. These people are very brave and noble and I hope they succeed in their quest to get aid to the Palestians and then get back home safely.

It could be worse….at least it’s not snowing. Then he really would be stuck, like us poor folk on the IOW.

Vote Up00Vote Down
Zanna
At around 5pm yesterday the Gaza aid convoy finally made it into Gaza. They will hopefully be there for 48 hours. What an amazing achievement after all the obstacles put in their way by the Egyptian authorities For up to date news on all the trials of the convoy go to stopthewar.org and readingplc websites. Also, Aljazeera english gives regular coverage of the convoy. Unfortunately, there has… Read more »
Vote Up00Vote Down
Zanna

Sorry correction – website is http://www.readingpsc.org.uk for the full story of the convoy’s journey, culminating in their entry into Gaza last night.

The most heart felt congratulations to Pater Venner and the rest of the convoy on delivering the aid and breaking the siege.Your epic journey and deed has been courageous.Your actions and the support given from Isle of Wight Friends of Palestine is a tribute to our citizens.

Excellent, well done to all of them.

Vote Up00Vote Down
Zanna
Today’s update is that George Galloway (MP), leader of the Viva Palestinia aid convoy to Gaza, was forcibly taken by the Egyptian authorites, when he returned to Egyptian soil from Gaza, and deported back to the UK from Cairo airport. It is believed that all convoy members might also be deported or at least black listed by the Egyptian government. At present they are at the Rafah… Read more »
Vote Up00Vote Down
Sally Perry

Thanks for the update Zanna.

Vote Up00Vote Down
Zanna
Saturday’s update: All convoy members were taken from Rafah by buses provided by the Egyptian authorities (apart from the Malaysians who supposedly went in a bus provided by their consulate) and driven straight to Cairo airport. They are being held there until they can be put on flights out of the country. Not sure yet which flight Peter will return on. Some convoy members are being sent… Read more »
Vote Up00Vote Down
Zanna

Zubeh(from Portsmouth) and Peter Venner(from the Isle of Wight), drivers of the Solent vehicles to Gaza are safely back in the UK today.
What an amazing achievement.
Zubeh is planning to give a talk about the aid convoy’s journey this Thursday at the Guildhall library in Portsmouth at 7.30pm
I will however confirm details of this in the next couple of days.

Zuber Hatia will give his talk on Thursday 14th January at 7.30pm entitled ‘Gaza convoy – What happened’
In room B at Arts Centre, Portsmouth Central library ,third floor, guildhall square, Portsmouth.
There will be a few attending from the Isle of Wight so see you there.