Isle of Wight athlete brings home the medals from Australia

Congratulations to Liz Dunlop for her performance on the Gold Coast of Australia, to Jan Fletcher and Aidan Pierce at Eton Dorney. 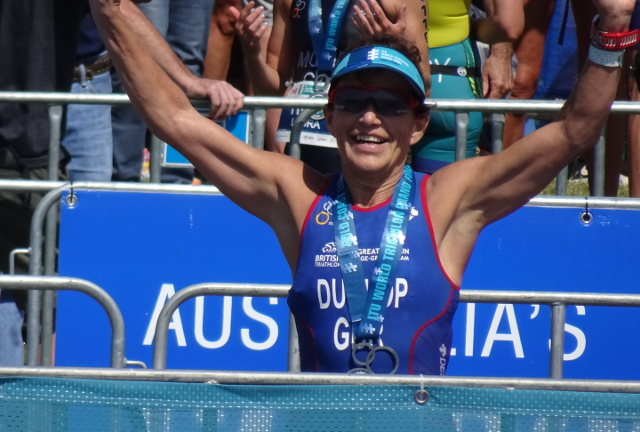 First up was the sprint event, which was a draft legal race. Liz completed it in 1:22:39 and finished twelfth in the 60-64 age group. Liz had a super PB swim of 12:24 coming out tenth in her age group.

The 20km technical bike route was fairly flat with a couple of hills added in, but made tougher with the headwind on the outward stretch. Liz managed to get into a pack on the to complete it in 38:19 and enter T2 in fourteenth and finished off with a solid run split of 26:12, making up two places to finish in twelfth position.

One point off
Three days later, she took on the standard distance (non drafting) event, and had a similar race, with a PB swim of 24:44, exiting in twelfth position. The 40km bike was two laps of the sprint distance but it was made tougher this time with a strong head wind on the return legs. Liz completed this in 1:15:44, losing a few places to faster cyclists. The run again was a two lap route, taken in the sprint course. Liz completed it in 54:16 to finish in total time of 2:40:51 and sixteenth in her age group, disappointingly only one place off a PQ for next year’s World Championships In Lausanne.

Liz was happy with her performances over the two races, as these included tough quality fields of triathletes and this has been a long season of racing, and still yet not finished.

She would like to thank Isle of Wight Council and Wightlink for their continued support through the IW Talented Athlete Award Scheme.

Eton Dorney Triathlon
On Sunday, Jan Fletcher took on the season finale standard distance Tri at Eton Dorney finishing first out of 12 in her age group (40-44) and seventh female overall, out of 85.

What started out as a nice and calm day ended up being really quite blustery so with an open and exposed 42.5km bike course there were some really tough sections of head wind to contend with.

The swim was in the infamous Eton Dorney rowing lake and was two laps of a 750m course. Jan exited the water in a disappointing 31.15, twenty-sixth place and then struggled to get out of her wetsuit resulting in her dropping a further two places in T1 and starting the bike leg in twenty-eighth position. This left Jan with a lot of work to do on the bike which was eight laps of the flat, but long, 42.5km course. The weather started off calm but the wind soon picked up making it a tough bike course in sections due to course being open.

Jan had a fantastic bike leg, gaining an incredible 16 places and posting the fifth fastest female bike split in a fantastic time of 1.16.22. This took Jan up into tenth place. Jan exited T2 in eleventh position and then posted a solid run of 47.36, making up four places to finish in seventh place with an overall time of 2.38.56.

Jan was really pleased with the age group win, capping off a successful season in what is only her second year in triathlon. This year Jan has qualified for the Island Games triathlon team for Gibraltar next year and also the GB age group triathlon team which will see Jan competing in the European championships in Weert, Amsterdam in 2019.

Island Games place for Aidan
Congratulations also to Aidan Pierce, from Apse Heath also completed the race. Aidan had a super swim to exit the lake in fourth position in 21.16 followed by 1:15:05 for the bike and a fast 42:55 for the run to finish in fifteenth position overall and third in the 20-24 age group in an overall time of 2:20:34.

This result gives Aidan a qualifying standard for the 2019 Gibraltar Island Games and a place in the Isle of Wight Island Games Triathlon Team.