The Wight Knight says he’s not a crime fighter or vigilante, but a real life super hero who will patrol the streets of the Isle of Wight, “to make the Isle of Wight community a better, safer place to live and enjoy”. 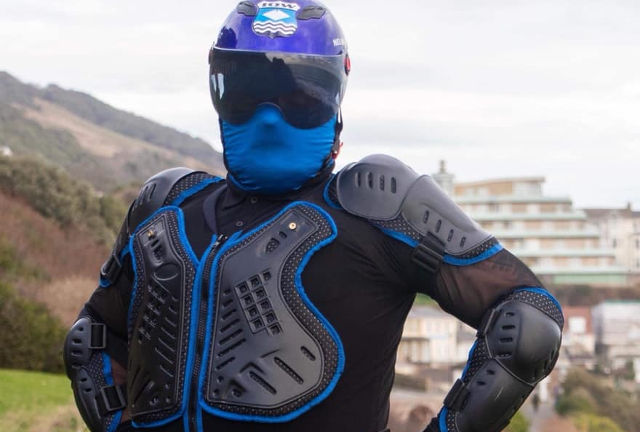 At the beginning of last month, a real life super hero (RLSH) for the Isle of Wight was revealed on social media. The Wight Knight launched himself on Facebook and Instagram revealing his costume and plans to patrol the streets of the Island.

Just before Christmas the Wight Knight announced that he had become “Division Commander for the Justice Alliance Initiative UK Division” and planned on “working to make the Isle of Wight community a better, safer place to live and enjoy”.

Wight Knight: Division Commander for the UK
Earlier today, explaining what inspired him to take on this role, the Wight Knight told OnTheWight,

“I’ve always liked the idea of helping the community and I saw some photos of super hero cosplayers from the last Comic Con on the Island and wondered if there were people who dress up like that all the time.

“I came across the RLSH (real life super hero movement) documentaries on YouTube, mostly in America, but some over here, in places like London and Liverpool.

“I messaged an RLSH group called the Justice Alliance Initiative (JAI) who accepted me into their ranks and gave me an introduction to being an RLSH and have become a division commander for the UK.

“In the future I hope to help open other branches of the JAI across the UK.”

“I do not go out to fight crime or issue punishment on individuals. I only patrol to look for things I can report to the police and let the proper authorities deal with the legal detainment.

“I also never use force in any instance unless it is to protect my own life.”

“Went on patrol in town of Ventnor, spoke to several people including one lovely couple for five minutes who took a photo of me and Handed out four information cards.

“Met Jack Charge Photography for a photoshoot around the cliff path to Steep Hill Cove and across the seafront, wonderful scenery. Jack is a Great photographer and great guy.

“Went all the way through to Upper Ventnor and spotted some girls throwing stones at properties who soon dropped them and ran home when they thought I was a ninja. Successful patrol.” Now I am worried to go out and about…

Vote Up20Vote Down
Mr Magoo
This character who appears for some reason to have been taken seriously by at least two Island media outlets, is a mix between fantasy and reality. If our White Knight is a serious champion for law and order why does he have to dress like a cartoon character to do it when he risks ridicule at best and possible assault at worst? He must fear the latter… Read more »
Vote Up20Vote Down
Alternative Perspective

What’s that word Bob Seely is fond of using again???

How do you know it ISN’T Bob Seely?

Thank you. That actually made me laugh out loud. Always a tonic!

Vote Up2-1Vote Down
peterj
Consider the facts: 1. The main colour on the outfit after black is blue. 2. On his King’s College profile he lists ‘non-conventional conflict’ as one of his research interests. 3. He is a highly decorated special forces operative (or something). 4. He has the allure of a roguish billionaire playboy like Batman. 5. Batman also wore a lot of black. 6. He allegedly is part of… Read more »
Vote Up6-1Vote Down
freddiem

Whatever floats your boat. I should think small children and some adults will love him.

Thank you very much for the article. Unfortunately my Facebook has gone down multiple times but you can follow what I do on my Instagram http://www.instagram.com/thewightknightiow